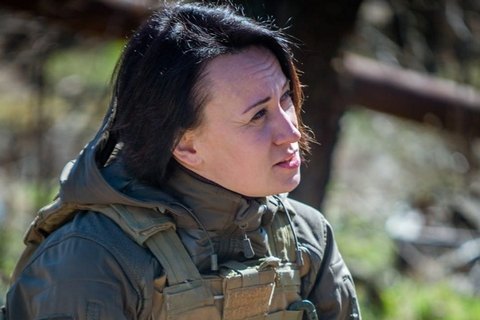 Operatives of the Security Service of Ukraine (SBU) also took part in the raid, according to journalist Taras Berezovets.

He said that investigators threatened to break the door. The volunteer was streaming the raid until her phone was confiscated.

He suggested that her house was raided as part of the case over her and MP Sofiya Fedyna's so-called "threats" to President Volodymyr Zelenskyy.

"What a preparation for the Normandy Four meeting. I have a question: are these political reprisals already when they come to Ukrainian army servicemen, not to separatists, or it is too early yet?" Berezovets asked on Facebook.

On 6 October, Zvirobiy and Fedyna recorded a video in which they discussed the ways in which President Zelenskyy, who went to Donbas a day earlier, could die.

"Marusya and I were walking and saying that Comrade President appears to think that he is immortal… A grenade can happen to explode there, there is occasional shooting. It would be perfect if this happened during a Moscow shelling, when someone in a white shirt arrives at the front line. I really wish he got shelled a little while he was there," Fedyna was seen saying in the video.

Petro Poroshenko's European Solidarity party called the criminal proceedings opened against Fedyna and Zvirobiy persecution over their views and restriction of the freedom of speech in Ukraine.

On 26 November, the State Investigation Bureau drafted a suspicion notice for European Solidarity MP Sofiya Fedyna. She is suspected of threats to kill President Zelenskyy.