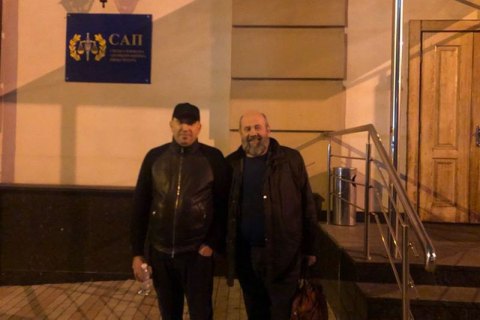 Detectives of the National Anticorruption Bureau of Ukraine have detained Odesa businessman Vadym Alperin when he came to the Special Anticorruption Prosecutor's Office, Ukrainian News has reported.

He was to be detained a day earlier during a special operation at the Kyiv customs but he managed to flee. Afterwards President Volodymyr Zelenskyy announced a reward on any information about his whereabouts, having called him a "smuggling godfather".

Since October 2016 law enforcers have been investigating abuse of office by officials of the State Fiscal Service who helped Alperin's companies to customs clear goods at underestimated value.

NABU detectives initiated an arrest of 450m hryvnyas of companies involved in the scheme.

In November 2017, Alperin offered detectives 800,000 dollars to have his case transferred to another law-enforcement agency.

He was detained for this and sent to court.

On 26 November 2019, the NABU carried out a special operation during which they detained 10 individuals on suspicion of customs violations. Seven of them are customs control officials, including a deputy head of the Kyiv customs office, Serhiy Tupalskyy.