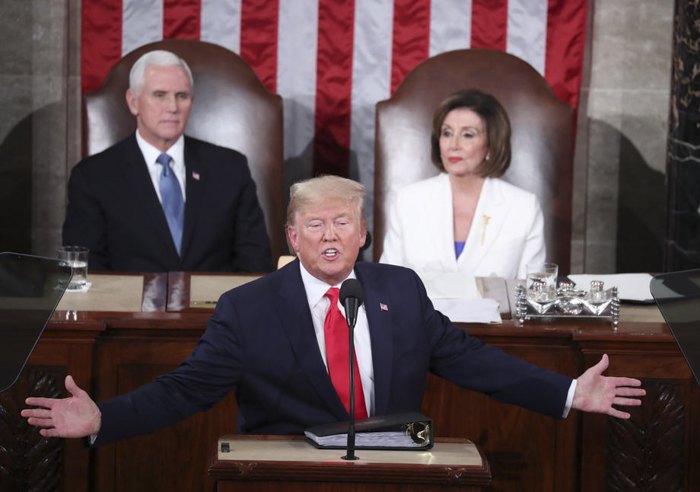 In this speech, little was said about international politics (it was about domestic problems for the most part). However, there was nothing about Ukraine – there were only references to Venezuela, Iran, Israel, Afghanistan, China and a hint of the EU. This is something that is the most important signal for us. The impeachment process organized by the Democrats (whether we like it or not) forces Trump to gradually distance himself from mentioning the Ukrainian agenda in public.

Many will argue with this, saying that the root cause is completely different, but it does not matter: since once the senators vote against it and Trump gives a victorious speech, the topic of Ukraine will gradually disappear from public use. We will be mentioned only in a negative way. Less often, for sure, since Trump definitely doesn’t benefit from showing his reflections on this subject. And that’s a tragedy for us.

No handshake for Pelosi

Trump's speech did not begin with words but with a refusal to shake hands with Nancy Pelosi, the speaker of the US House of Representatives. After handing over the text of the speech to her, the president turned his back on the representative of the democratic majority. It happened for the first time in history. 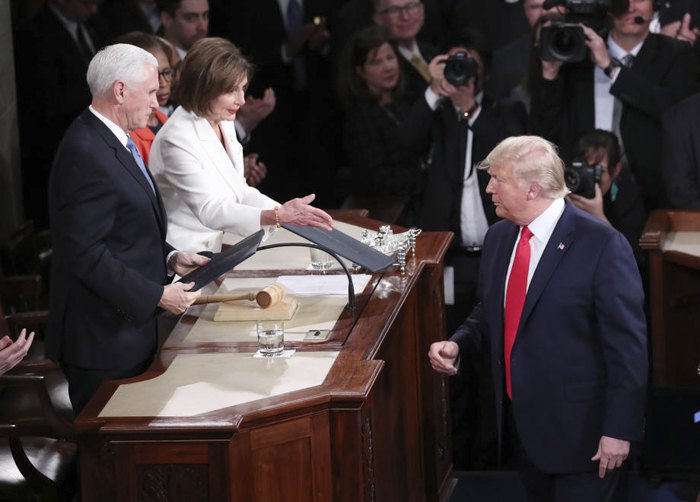 The reasons are clear: the organized impeachment process made Trump and his administration anxious, forced them to make a lot of effort to maintain support among both politicians and voters. Moreover, such a gesture of Trump does not only show his disregard for Pelosi, it also demonstrates the fact that he is ready and will attack by himself.

One day wasn’t enough for Republican senators: they were in too much of a hurry to vote on impeachment. The main goal was to deny the Democrats a vote of no-confidence in the President and to make Trump himself give a victory speech on the day of his statement in Congress. Anyway, the head of the White House, most likely, was not going to talk about it. There was no mention of that process in his speech. At the same time, everyone understands that tomorrow’s Senate vote is a convention that the Democrats lost in this fight, that they were not able to get the Republicans on their side, that the Senate majority would fail the vote tomorrow.

Many Republican senators do not benefit from going against Trump: there is no other candidate, and a third of them will have to run for re-election in 2020. Republicans will need a White House resource and support from the president himself during the campaign. 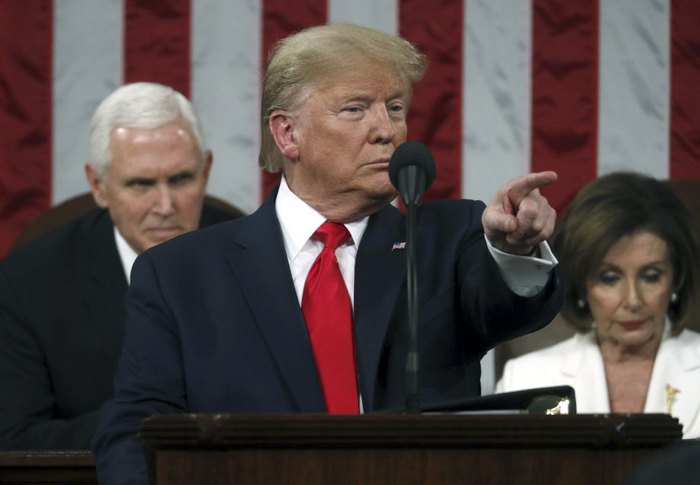 In fact, Nancy Pelosi was right when, long before the impeachment process, she tried to convince the Democrats not to start the procedure now - almost a year before the end of the presidential race. This haste led to the fact that the Democrats lost a significant advantage. They will not be able to organize impeachment next time: after all, the mood within society does not change (the head of the White House did not suffer much from the electoral potential). In addition, Americans love the winners. And Trump is the winner today.

However, nothing is over: the Democrats will continue the fight and we will hear more mentions of the Ukrainian scandal. Trump will also begin his campaign. Most likely, we will see some incriminating evidence on Biden in the middle or at the end of the election campaign. Everything will depend on whether the former US vice president reaches the finals of this race or if one of the competitors from the democratic camp knocks him down.

And this is exactly what the Democrats are thinking about, including Nancy Pelosi, who was forced to stand with her arms down, while Trump was receiving ovations from the audience. For now, she can only tear up the papers with the speech of the American president. 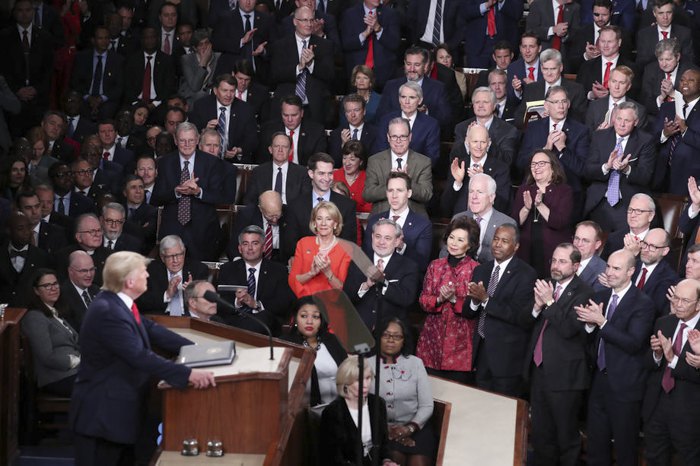 Trump's entire speech was devoted to the economic achievements of his administration and criticism of the left wing. And this is understandable because now he is not fighting for the traditional democratic electorate but for those who live "in controversial states" and always doubts who to give the election victory to. All these people are the American poor farmers from Ohio, unemployed miners of Pennsylvania and the workers of Michigan automobile industry who lost their profit. These people definitely aren't interested in the issue of Ukraine; they are rather interested in their wallet.

"Over the 8 years of the last administration, more than 300 thousand people of the working age were deprived of the opportunity to work. In just 3 years of my administration’s work, 3.5 million people of the working age entered the labor force," Trump says, pointing out that record-breaking wage growth can be seen among not "whites" but "blue-collar workers", that is, among workers.

And Trump really relies on workers, poor families, single mothers and unprotected representatives of national and ethnic minorities - African and Hispanic. He is talking about socially occupied population, about affordable education, about the laws on protection that should be adopted by Congress immediately - today. 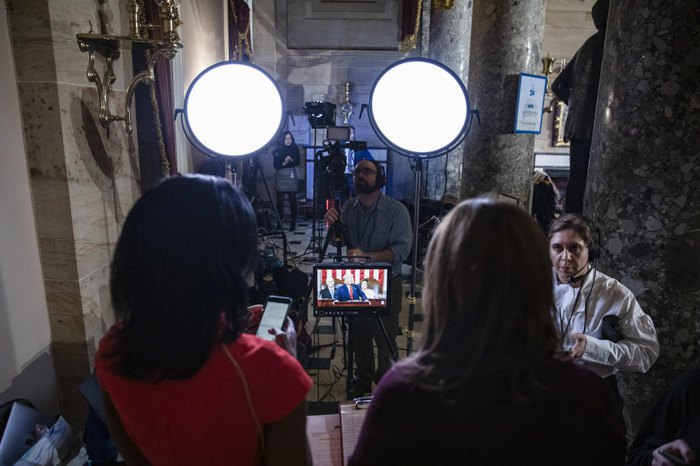 And it sounds like a refrain: we won’t let the socialists destroy our medicine, if you’re ready to pay for migrants - you’ll be with the left wing, we will protect American elderly people.

New trade agreements with Canada, Mexico and specifically the signing of the primary trade agreement with China are the main things. Trump talks about NAFTA, an agreement that (as he himself states) made him run for president.

The signing of the new agreement with Canada and Mexico "will create 100 thousand highly paid jobs," Trump says himself. It should be noted right away that this is an agreement that the Democrats had to support in the course of the unfolding battle. 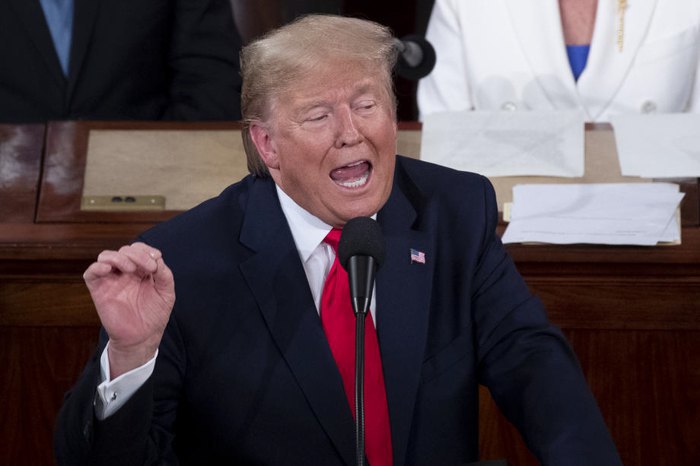 The agreement allows not only to increase wages for employees of American companies that are involved in the American automobile industry but also stop their management from moving enterprises to Mexico. These are really new jobs. Specifically in the Big Lakes region - where those "controversial states" are located that will decide whether Trump will get the opportunity to enter the Oval Office for the second term.

Guaido but not Zelenskyy

The appearance of Juan Guaido, the leader of the Venezuelan opposition, in the lodge of invited guests was a surprise for everyone. Moreover, Trump not only greeted the politician in his speech, he directly showed him the support of the United States, calling him the only legitimate president of Venezuela.

"Mr. President, please bring this message to your homeland. All Americans are united with the Venezuelan people in their righteous fight for freedom! Socialism destroys nations. But always remember, freedom unites the soul," Trump said. Again, there is the criticism (however subtle it is) of the leftist views in the United States. 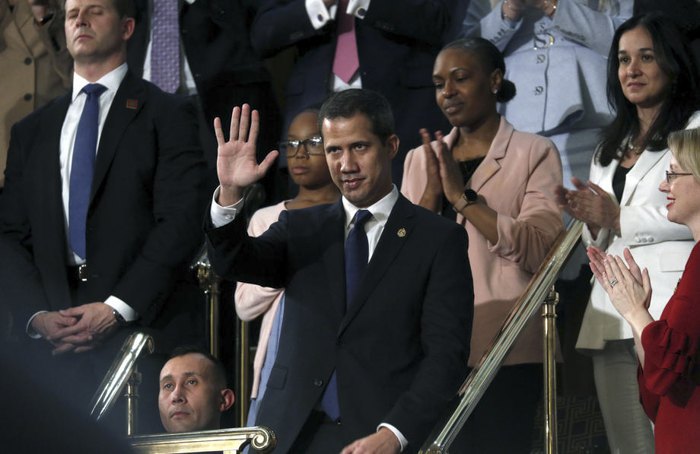 Photo: EPA/UPG
Juan Guaido, the leader of the Venezuelan opposition

Not only Guaido heard the ovations from the whole audience - Americans and Republicans, but also Americans from such an important for Trump Ohio - the veteran of several wars, which was presented today for a high military award.

The ovations were also received by the parents of Kayla Muller, a humanitarian worker who died at the hands of Al-Baghdadi,the ISIS leader, who was killed by the US military. The applause was addressed to the family of Christopher Hake, the sergeant of the US Army headquarters in Iraq, who was killed by the late Iranian general, Kassem Suleimani.

"Kasem Suleimani was the terrorist who is responsible for the assassination of Sergeant Hake... That's why last month, under my leadership, the United States military launched an impeccably accurate attack that killed Suleimani and put an end to his evil reign of terror," Trump will say. 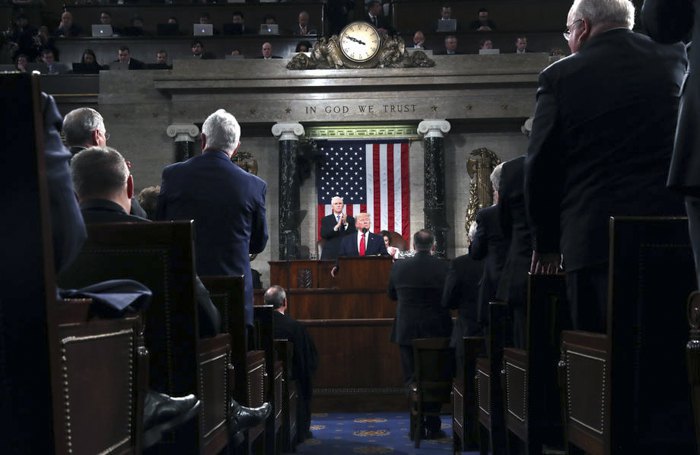 Trump will say about a lot of people: about the American military, who he obviously relies on, about Americans serving in Afghanistan, about families fighting dangerous diseases, about NATO, Israelis and a possible settlement with the Palestinians. Trump will not say only about one thing - about Ukraine. He will not talk about Vladimir Zelenskyy. And this is a sentence.

This is what the Democrats achieved with their impeachment, those who are here, with us, stood for Trump's quick resignation once again.

Donald Trump is a winner tonight. And he has gotten very good chances to lead the United States for the next four years. While Ukraine has gotten additional problems: Kyiv should not think about bipartisan support now. It should think about how to stay in the sight of the current US president, who will definitely mention Ukraine not in a beneficial way and will hardly meet with its leadership. It is not an easy task for everyone - from the president to the new ambassador. 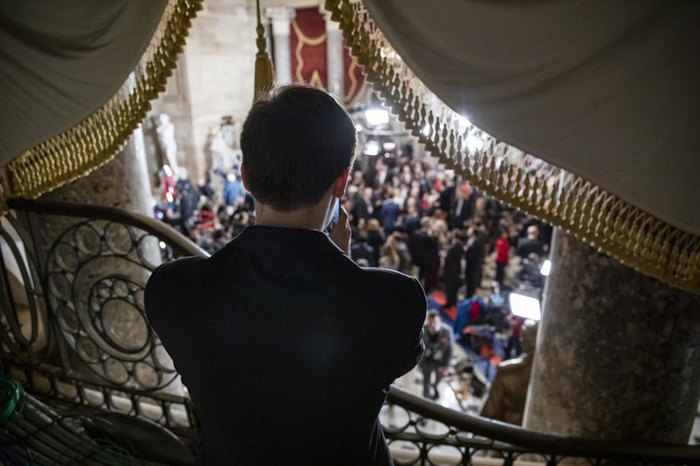