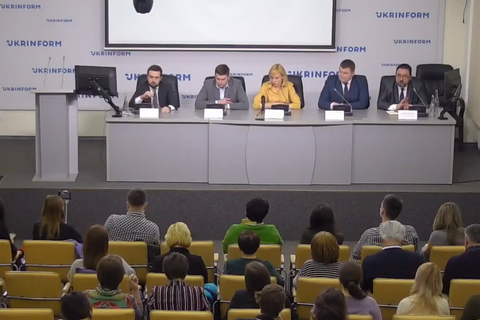 The Dim (Home) TV channel for Ukraine’s occupied territories has started test broadcasting as of 1 March, its acting director general Yuliya Ostrovska has said at a news conference.

According to a deputy head of the presidential administration, Kyrylo Tymoshenko, it is a digital channel which is not available via satellite or online due to copyright restrictions.

“To reach the audience, news content is not enough. That is why we negotiated with all the major players in the Ukrainian television market and agreed that they would work with us to deliver signal to the temporarily occupied territory. How exactly will it work? We agreed that the most premium content in Ukraine will be shown on this channel. These are TV series, talk shows, entertainment shows, football matches, and sports broadcasts," Tymoshenko said.

According to another deputy head of the presidential office, Yuriy Kostyuk, last Sunday the channel showed a football match between Zarya Luhansk and Olympyk Donetsk.

Ostrovska said that media holdings share their products "almost for free, for some symbolic amount".

Dim will produce its own news. "In a while, we will add various formats: a morning show, a talk show. We plan that in two years it will fully rely on its own production," Tymoshenko said.

After that, the channel can become available via satellite and in cable networks.