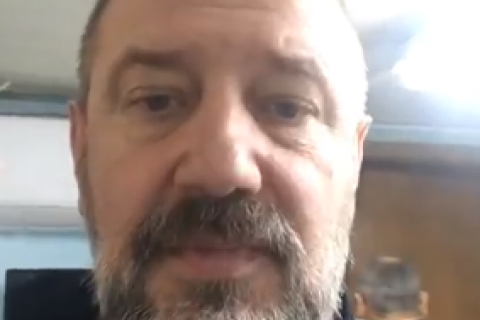 A former commander of the Aydar battalion and ex-MP, Serhiy Melnychuk, has been detained on Bulgarian-Greek border. He said on Facebook that, as far as he knows, this was done on Russia’s request.

“The Interpol card was issued by Russia. Now Interpol will be detaining me,” he said on the evening of 1 March.

He is in a Greek police station with his pregnant wife and nine-month son.

“The embassy is silent, no-one says anything to anyone. I call on you to raise the issue with the embassy as soon as possible, so that I could at least be provided with a lawyer who would defend my rights,” he said.

The Ukrainian consul visited Melnychuk in a police station in Thessaloniki, the director of the Ukrainiuan Foreign Ministry’s consular service department, Serhiy Pohoreltsev, said, according to Ukrayinska Pravda.

“The consul visited the site of the incident at night, provided logistic help and helped the Melnychuk family with hotel accommodation,” he said.

Melnychuk is waiting for a local prosecutor to arrive. This may happen on 3 March as 2 March is a bank holiday in Greece.

In 2017, the Security Service of Ukraine (SBU) opened a criminal case over the alleged attack by Serhiy Melnychuk and his subordinates on a private house in Novosvitlivka, Luhansk Region, in August 2014.