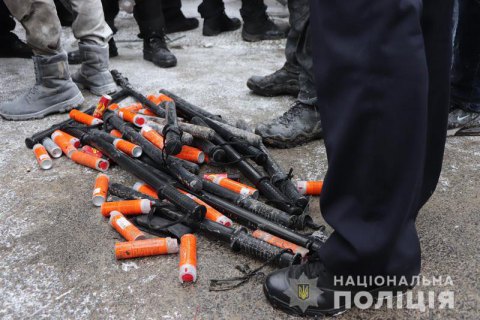 At least five people were hurt in a scuffle which broke out between entrepreneurs and the municipal security at the Barabashovo market in Kharkiv on 27 February, police have said.

According to the local news website NewsRoom, utility workers arrived at the market in the morning to demolish an advertising arch which prevented the city authorities from building a new road right through the market.

Clashes broke out after people unhappy with the construction plans expressed their protest. Firecrackers and tear gas were used.

Several hundred people gathered at the site, according to the market press service.

Some entrepreneurs who protested against the construction got eye burns from gas sprays, some were beaten by metal rods.

The regional police said that it had detained 53 people, confiscated rubber batons and a large number of gas sprays. It confirmed that arms were used during the conflict but did not say which ones.

The head of the Kharkiv regional state administration, Oleksiy Kucher, said that he was going to discuss the Barabashovo case with President Volodymyr Zelenskyy because “events like this should not be happening in a civilized world”.