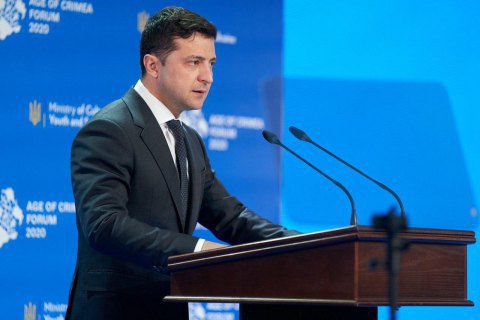 President Volodymyr Zelenskyy has signed a decree establishing Day of Resistance to Russian Occupation of Crimea and the city of Sevastopol.

He announced this at the Age of Crimea forum on 24 February.

"Six years ago, the largest rally in support of the integrity and unity of our state was held in Simferopol. Paying tribute to the courage and heroism of all participants in the rally, today I am signing a decree on Day of Resistance to Occupation of the Autonomous Republic of Crimea and the City of Sevastopol. This day will be celebrated annually on 26 February,” the president said.

He noted that the return of the peninsula is not only the goal and dream of Ukraine, but also the key to security on the planet. "This is the restoration of faith in international law, faith in justice," the president said.

“This day is sure to come, and our champion Oleksandr Usyk will hold a fight in Sudak, Jamala will give a concert in Koktebel, Oleg Sentsov will present a new film in Yalta. And the Majlis of the Crimean Tatar people will be able to return to Simferopol, to its lawful home in 2 Schmidt Street. We will definitely celebrate this day near the monument to Lesya Ukrayinka in Yalta and Ismail Gasprinsky in Simferopol. All of this will definitely happen," he said.

Zelenskyy added that the war would end in Donbas and peace would come to Crimea.

During his speech, the president also called the return of Crimea an indisputable part of the Ukrainian national idea.

“Six years ago, Russia annexed Crimea. Six years ago our life changed: we realized that we live in a world where memoranda, unfortunately, cost almost nothing, and the system of international law and world security is imperfect and vulnerable. Today we are doing everything possible to end the war in Donbas and not to lose the best Ukrainians every day. All our efforts are directed at this. But this does not mean that Crimea is being removed from the agenda and may become the price of peace in Donbas, peace in Ukraine,"the president added.

On 26 February 2014, about 7,000-8,000 Crimean residents under the Ukrainian and Crimean Tatar flags gathered for a rally in support of a united Ukraine. At the same time, about 3,000-4,000 activists with Russian and Crimean tricolors came out to rally at the initiative of the Russian Unity party. The mass rally turned into a fight. The confrontation ended with the representatives of the Crimean Tatar people, which were twice as many, ousting pro-Russian opponents from the square in front of the Supreme Council. Because of the stampede, two people died, several dozen were injured.

The Crimean parliament’s meeting, where its members planned to consider the dismissal of Anatoliy Mohylyov’s government and to schedule a referendum on the independence of the autonomy, did not take place due to the lack of quorum.

However, in the early hours of 27 February, Russian troops took the Crimean parliament and government buildings under their control.

Rallies commemorating the resistance efforts have been held in Kyiv since 2017.