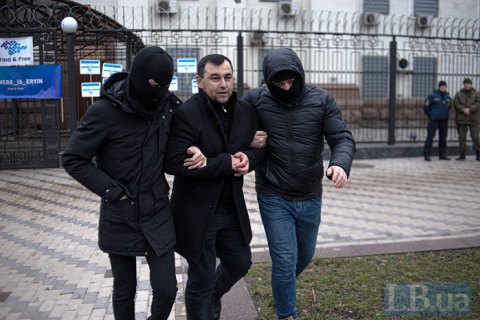 A tribute to Crimean Tatar Reshat Ametov who was abducted and killed in March 2014 was held in Kyiv.

As part of the performance held in central Kyiv masked men abducted former political prisoner Ismail Ramazanov as he was delivering a speech to the crowd.

“Russia holds over 100 people in custody in annexed Crimea under politically motivated cases, 45 were abducted, there is no information on many of them, and we need to remind society about them every day,” Ramazanov said.

Reshat Ametov was abducted in Simferopol on 3 March 2014 during his solo picket against Russian aggression outside the Crimean Council of Ministers. His detention was filmed on the camera. Several people in uniforms, the so-called “self-defence of Crimea”, shoved him into a car and left in unknown direction. Two weeks later his tortured body was found near the village of Zemlyanychne, Bilohirsk District.