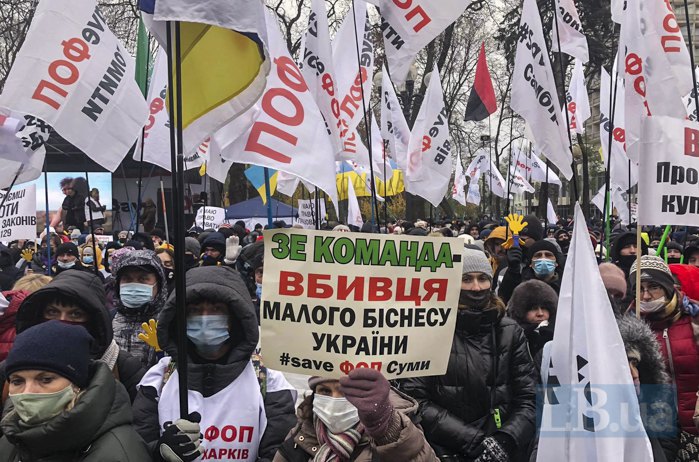 Clashes broke out outside parliament as police prevented angry protesters from breaking through the cordon after MPs decided against delaying the introduction of mandatory cash registers for certain groups of entrepreneurs. Protesters consider this requirement discriminatory.

The coronavirus death toll in the Ukrainian army has reached 24, according to the Medical Forces Command.

Ukraine expects to receive 8 million doses of a coronavirus vaccine in Q2 2021, according to Prime Minister Denys Shmyhal. The government is also in talks with global companies to contract more batches.

The Health Ministry has said that the USA will help Ukraine to communicate with vaccine producers to speed up the signing of contracts for vaccine supply. According to Health Minister Maksym Stepanov, US Secretary of Health and Human Services has pledged support for the ministry's communication with Moderna, Johnson&Johnson, Pfizer and Novavax.

Parliament has obliged the Cabinet of Ministers to inform the public about any tightening of coronavirus restrictions at least a week in advance.

Parliament has failed to pass a resolution which would advise the Cabinet of Ministers to cancel the weekend quarantine.

Odesa mayor Hennadiy Trukhanov has been re-elected for the second term after he secured the support of 54.28% of voters in the runoff.

Independent candidate Oleksandr Honcharenko has been elected Kramatorsk mayor. He is the marketing and distribution director at the Enerhomashspetsstal industrial enterprise.

The runoff in the election of Kryvyy Rih mayor has been rescheduled for 6 December, according to Opora NGO. The decision was taken after the winner of the first round Yuriy Vilkul refused to take part in the runoff for health reasons.

Ukraine's newly-appointed ambassador to Israel, Yevhen Korniychuk, has presented his credentials and taken office, the embassy has said on Facebook.

President Volodymyr Zelenskyy has dismissed the head of the Mykolayiv regional state administration, Oleksandr Stadnik, and appointed Heorhiy Reshetilov as its acting head. On 11 November, the Cabinet of Ministers nominated Servant of the People local leader Vitaliy Kim for the post.

The Cabinet of Ministers has dismissed the head of the State Space Agency of Ukraine, Volodymyr Usov, and appointed his first deputy head Mykhaylo Lev as the agency's acting head.

Ukraine will not hold a new census until 2023 for financial and epidemiological reasons, Minister of the Cabinet of Ministers Oleh Nemchinov has said in an interview with RBC-Ukraine.

Parliament has passed two bills aimed at paying off the tax debt of the Ukrnafta oil company to the tune of over 30bn hryvnyas, which has been accumulated since 2003. Nearly the entire period the company has been controlled by tycoon Ihor Kolomoyskyy. Ukrnafta is Ukraine's oil extracting company in which Naftogaz of Ukraine owns 50%+1 share and Kolomoyskyy's Privat Group holds 43%.

The League of Nations match between Switzerland and Ukraine has been cancelled over the outbreak of coronavirus in the Ukraine national team.

Ukrainian theatre director Roman Viktyuk, 85, died in a Moscow hospital where he was recovering from coronavirus diagnosed in October. He will be buried in the family vault in Lviv.