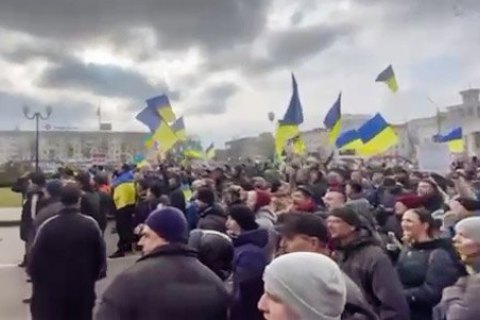 The adviser to the Minister of Internal Affairs, Anton Herashchenko, wrote in Telegram that a spontaneous rally against the Russian occupiers began in the central square of Kherson near the regional state administration building.

"A rally against the occupiers has just begun in the central square of Kherson! People, don't be afraid! Get together! Go to the streets and squares of the temporarily occupied cities! Demand that the occupiers leave Ukraine!" Herashchenko wrote.

He also advises Ukrainians to show the occupiers convoys of burnt equipment and corpses of the Russian military on their smartphones.

On the eyewitnesses' stream, you can hear people gathering near the building of the Regional State Administration shouting: "Kherson is Ukraine!", "Putin huilo!", "Fascists!".

Updated: The occupiers began firing into the air to disperse a crowd of 2,000 civilians.

On 3 March, the occupiers brought buses with people to Kherson for an artificially organized rally "for Russia." Russian troops occupied the city.