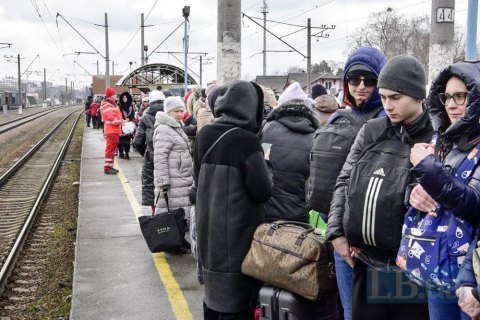 Russian occupiers blew up the evacuation train and damaged the railway track in Irpyn, near Kyiv. There are no victims. The city mayor, Oleksandr Markushin, reported the situation, Suspilne says.

“He got off the tracks; two tracks were blown up. But it was empty; it was just going to pick up the people. The driver, the train staff, are all alive; everything is fine. I made an emergency decision for people to go to Romanivka, and now we are organizing the buses to take them to Kyiv. We will evacuate all 1500 people today; the evacuation continues,” Markushin said.

According to him, there are about 200 occupiers’ tanks and APCs near Irpyn. During the night, the city defenders burned down 11 enemy tanks; there were injured.

On March 3, more than 1000 women and children were evacuated by train from Irpyn and nearby territories.

On March 4, the Red Cross Rapid Response Team, together with local authorities, police, and the territorial defense forces, escorted evacuation trains from Irpyn. About 2500 people were evacuated, most of them women and children.