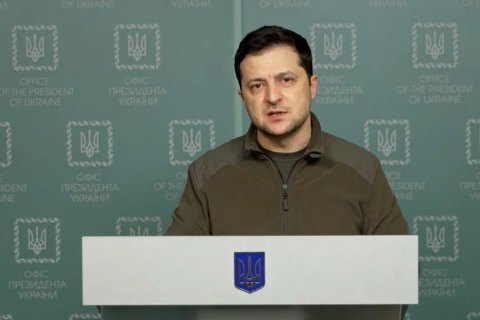 The President of Ukraine, Volodymyr Zelenskyy, stated that the Armed Forces of Ukraine bravely hold all critical areas of defence. They hold Mykolayiv, Kyiv, Chernihiv, and Sumy regions, Donbas. They counterattack the occupiers near Kharkiv, defending the city.

"The Russian army did not reach the planned frontiers. Nevertheless, it reached the number of almost 10,000 Russian soldiers killed. 10,000! It's scary! These are boys aged 18 or 20 - very young, almost children. Soldiers were not even explained why they were going to fight; for what and why they are in a foreign land? 10 thousand. Russia could have definitely given these people something other than death," said the President.

According to him, the occupiers will not stay for long in the places they managed to pass.

"I admire every Ukrainian man or woman who protests. They take the national flag and show the Russian military that the occupiers are losing. They must lose because it is impossible to win over people who stop military equipment without weapons. The people refuse to take anything from the invaders' hands, however difficult and dangerous it is. Nevertheless, they do not lose their dignity, and they will never lose it," Zelenskyy said.

The President noted that during the negotiations in Belarus, the groups agreed on the first step - the organization of humanitarian corridors. The assistance is already on the way.

"Humanitarian corridors must work today in Mariupol and Volnovakha to save people - women, children, and the elderly - to give food and medicine to those who remain in the cities. Our help is already on the way. Everyone who needs help must be able to leave. Everyone who can defend their city must continue fighting - they must because if everyone leaves, then whose city will it be? We are doing our best to make the agreement work. It is one of the main tasks today. Let's see if we can move further in the negotiation process," the President concluded.