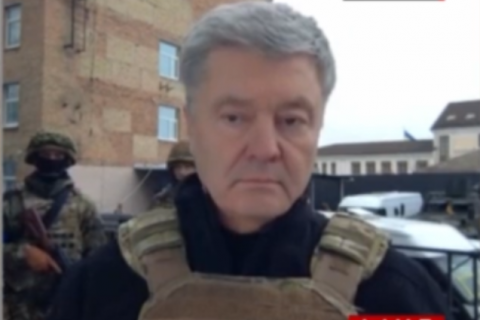 The missiles attack on the International Center in Yavoriv in the Lviv region is an act of terrorism on the border with NATO. Petro Poroshenko said this during the live interview with American TV channel MSNBC. He addressed the allies to open a second front to hold Russian aggression.

"This morning, russians launched about 30 cruise missiles from Russian Black Sea Fleet aircraft against the International Center for Peacekeeping and Security in the Lviv region. As a result, more than 35 people were killed and about 150 injured. Moreover, the russians launched these 30 missiles towards our western border, at a target just 20 kilometers from the NATO border, "Poroshenko said.

In his opinion, it is time to finally open the second front against Russia. "

"Please learn the lessons of World War II. The second front does not mean the presence of NATO soldiers. Currently, it is about providing us with defensive weapons. It also includes the supply of anti-aircraft systems. We need financial help. As well as humanitarian aid. We also need new sanctions in order to motivate Putin, stop his aggression and get out of our country, "Poroshenko emphasized.

"We also need a separate special decision on the lend-lease based on providing us with everything we need - from food to ammunition. After all, here we are fighting not only for Ukrainian land. We are fighting here for our partners, for NATO, for freedom and democracy, "said the fifth president.

Poroshenko also expressed his condolences to the American people in connection with the murder of a journalist in Irpen near Kyiv who was a US citizen.

"I would like to take this opportunity to express my gratitude to all foreign journalists who now work here in Ukraine and provide the world with truthful information about Russia's aggression against our state. Let me express my condolences to the American people, because just a few hours ago, an American journalist was killed in Irpen. This is definitely a tragedy. This is exactly how Putin is creating a humanitarian catastrophe, "Poroshenko stressed.