The first UPA units began to form in Volhynia and Polissya in late 1942. They became an expression of resistance to the brutal German occupational policies.

The Organization of Ukrainian Nationalists, which had an extensive network of cells in western Ukrainian villages, initially tried to curb this spontaneous movement. They decided what their strategy was going to be: the uprising was to take place at a time when the USSR and Germany were mutually exhausted from their war.

Such a policy of waiting was characteristic of most partisan movements of the time, including the Polish and French. However, Ukrainian realities did not allow this. Popular anti-German resistance was gaining momentum, forcing the OUN to begin building its army.

During the winter and spring of 1942–1943, the armed struggle in Volhynia continued, in conditions of constant opposition to the German occupational forces, Soviet partisans and Polish military formations.

During the spring and summer of 1943, there was also a conflict between various political forces of the Ukrainian liberation movement for control of the armed movement. As a result of negotiations and violence, the OUN (Bandera wing) managed to establish absolute control, relying on its extensive underground network.

Thus, the problem of political unity of the Ukrainian underground was solved fairly quickly. A single military and political leadership of the movement was created along with a coherent functional structure of the army.

Thus at the end of 1944, the formation of the territorial structure of the UPA included Volhynia, Rivne, Zhytomyr, Khmelnytsky, Vinnytsia, Ternopil, Ivano-Frankivsk, Lviv and Zakarpattia regions, the eastern lands of Pidkarpatska and Lublin voivodships in Poland and the southern territories of Brest and Pinsk in Belarus.

The total area covered by the insurgent movement in 1944 was about 150,000 square kilometers, and it was home to about 15 million people.

This is about a quarter of the area of the current Ukrainian state, a territory larger than modern Greece, with a population equal to that of the Netherlands. 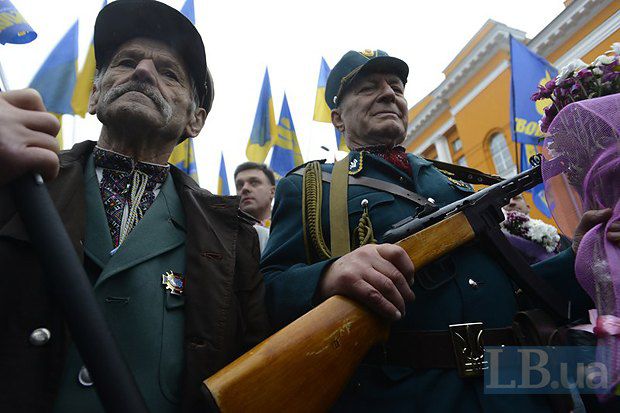 How many people were involved in the activities of the OUN and UPA?

There is no easy answer to this question, because for conspiracy reasons, accounting in the underground was never possible. Nevertheless, according to modern researchers, we think about 30,000 soldiers were in the ranks of the UPA at a specific time.

This number should be multiplied several times to take into account the total number of those who passed through the army.

The fact is that the insurgent units had a fairly high level of rotation — an ordinary insurgent was active for an average of two years, after which he either died or was taken prisoner. The average period of activity of insurgent commanders was even shorter — about a year. Therefore, it can be argued that about a hundred thousand soldiers flowed through the UPA.

As for the total number of participants in the liberation movement, the only information available to historians is that which comes from the punitive and repressive structures of the USSR. According to these estimates, during 1944–1952, half a million people were repressed for participating and aiding the UPA. But not all of them could be found!

Who were these people? The vast majority of them were ordinary villagers of all ages, who bore the brunt of supporting the armed movement.

Even then our volunteer movement was active!

Ordinary soldiers in the UPA ranks were mostly rural peasants. They belonged to units that operated in their own area. Most of them, aged 18–28 only had primary or an incomplete secondary education, were non-partisan and their participation in the UPA was their first military experience.

A slightly different picture emerges in the analysis of the UPA command: they were mostly from the city with a secondary or incomplete higher education. Most of them were OUN members and had experience in public activity in youth paramilitary organizations (like Plast). Their average age was 30–35, most had military experience (in Ukrainian Nationalist Brotherhood, Red Army, Polish Army).

There is every reason to consider it the longest-lasting and most zealous anti-Soviet resistance movement in Central and Eastern Europe.

The duration of the struggle ensured the elasticity of underground tactics.

Ukrainians responded in a timely manner: deployed broad fronts or fighting in small units, building state structures or focusing on the information warfare.

It is difficult to say unequivocally when the underground ceased its activities. The turning point was 1954, when the last UPA commander — Vasyl Kuk — was captured.

Confrontations were recorded after this, especially in 1956 when the first convicted insurgents returned back to western Ukraine from Siberia.

The last battle of the Ukrainian underground was on April 12, 1960 in Pidhajetskyi district in the Ternopil oblast.

Some insurgents hid from Soviet rule for decades and only emerged with state independence in 1991.

And now let’s try to answer the main question: what did the insurgents achieve?

To answer this, one should take a closer look at the tasks they set for themselves.

After a short period when there was reason to hope for a completely exhaustive war between the USSR and Germany, the leaders of the liberation movement soberly assessed their own combat capabilities, and did not intend to achieve a military victory over the occupiers.

Their primary task was to protect people from the occupier’s repression.

It is difficult to say to what extent this was possible — it would need to ask the uncharacteristic question of «what would happen if there was no insurgent movement?»

Of all these questions, only the last can be answered with confidence. The fact is that the second, and perhaps, the most important task set by the liberation movement was to change the consciousness of Ukrainians, to provide moral and spiritual education.

They prepared society for a national revolution.

Ukrainian insurgents failed to reap the benefits of their own labour. At that time, world events did not allow such a revolution to take place.

It was on the UPA’s territory that in the late 1980’s that a mass national-democratic movement began, which culminated in the restoration of Ukraine’s independence in 1991. Undoubtedly, the Ukrainian Insurgent Army was a phenomenon in world history.

At the same time, its activity fully fits into the framework of the global phenomenon of the struggle of peoples for freedom and statehood, which became the most notable historical factor of the second half of the 20th century.

Then the political map of the world changed more in a few decades than it did for several previous centuries. And the Ukrainian liberation movement found itself in the midst of the global struggle of the enslaved nations. «Freedom to the people! Freedom of people!» — even then it was their main slogan.

The history of the Ukrainian insurgents became an example to other liberation movements as to how to resist for many years against a powerful enemy.

Ukrainians set a precedent that proved that national interests can be defended even in extremely unfavourable conditions. Finally, the practical experience of successfully waging an insurgent war against an occupying force proved useful.

It is still useful for today.

Today, our strong Armed Forces are defending Ukrainian women and children, Ukrainian hopes and dreams. They are well-equipped and courageous.

Today, world leaders and peoples of free democracies are side by side with us.

And we remind our enemy in the Kremlin: Ukraine will resist.