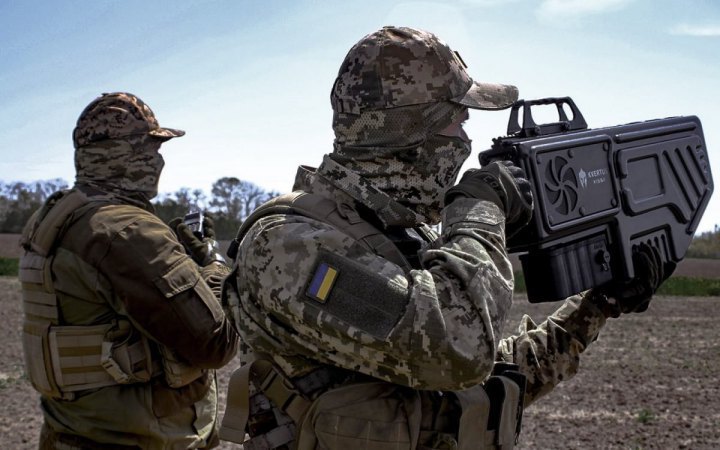 President Volodymyr Zelenskyy said in an interview with Danish journalists that the war must end by honouring our sovereignty and restoration of our territorial integrity.

Zelenskyy said he was ready to talk to President Putin, with or without mediators, if Russia was ready to end the war and get off our soil. "Unfortunately, but I have to state that today only President Putin decides whether the Russian army will stop or not," he stressed.

According to the General Staff, as of 18:00 on 14 June, the Russian occupiers tried to reinforce their units in storming Severodonetsk.

Ukrainian defenders repelled an enemy assault in the Bakhmut direction near Berestove.

An enemy missile was shot down in Khmelnytskyy Region today during an air alert that was announced throughout Ukraine.

"The wreckage fell in the field, there is no damage to buildings," said the head of the Khmelnytskyy regional military administration, Serhiy Hamaliy.

Four people were injured as a result of the shooting down of a Russian missile over Zolochiv. The wreckage of the missile fell on a brick factory.

"It is currently known that four people have been injured. One of them is a child. The condition of the injured is assessed by doctors as mild to moderately serious," said Maksym Kozytskyy, head of the Lviv regional military administration.

Air defence shot down a Russian missile in the sky over Ivano-Frankivsk Region.

According to Svitlana Onishchuk, the head of the Ivano-Frankivsk regional military administration, there were no casualties among civilians and no damage to infrastructure.

Soldiers of the Poltava Territorial Defence Battalion landed an enemy drone, which was probably gathering information about the city's railway infrastructure. They did this with the help of an ANTIDRON KVSG-6, money for which was collected by Poltava residents.

Another exchange of bodies of dead military personnel was carried out in Zaporizhzhya Region. The bodies of 64 Azovstal defenders were returned to Ukraine.

The process of returning the bodies of the Ukrainian military is ongoing and complies with the norms of the Geneva Convention, the Ministry for Reintegration of the TOT said.

Since 14 June, the European Union has been disconnecting Russia's largest bank, Sberbank, as well as Rosselkhozbank and Moscow Credit Bank, from the SWIFT interbank system as part of the sixth package of sanctions against Russia.

Representatives of the banks are still bracing and claiming that the SWIFT disconnection will not affect their operations.

The Cabinet of Ministers has simplified the registration of destruction and damage to Ukrainians' homes as a result of military operations. A special commission has been set up to audit losses.

Constitutional Court judges failed to elect new CCU head. A repeat election should be held no later than 15 July.

The Eighth Lviv Court of Appeal continued to ban parties marked as pro-Russian by the Ministry of Justice. At a meeting on 14 June, it was decided to ban Yevhen Murayev's Nashi party.

Also today the Eighth Lviv Court of Appeal banned the activities of the Volodymyr Saldo Bloc and Derzhava parties.

An exhibition by late photojournalist and our colleague Max Levin opened in the Romanian Parliament. The exhibition is entitled "Chronicles of the Russian invasion of Ukraine 2022: the beginning".