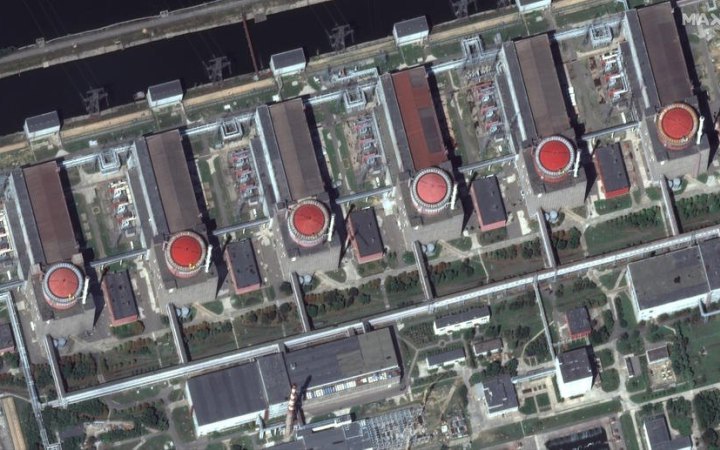 On 1 September, a long-awaited IAEA mission led by the agency's director general, Rafael Grossi, arrived at the Russian-occupied Zaporizhzhya NPP. It arrived even though the Russians were shelling the mission's agreed route from the Ukraine-controlled city of Zaporizhzhya to the NPP, as well as the ZNPP satellite city of Enerhodar.

Ukraine has high hopes for this visit. The day before, Ukrainian President Volodymyr Zelenskyy met Rafael Grossi and expressed his hope that the IAEA team would not only conduct an inspection at the plant, but also help to demilitarize it. All Russian military with any weapons should be withdrawn and the ZNPP should come fully under the control of Ukraine. According to Zelenskyy, demilitarisation of the plant's territory was a key security clause of his agreements with Grossi during the meeting in Kyiv.

After several hours of inspection at the ZNPP with Russian escort, Grossi and most of the 14 members of the mission left the plant. On his Twitter account and later at a briefing, he said that the IAEA mission's presence at the Zaporizhzhya NPP would be permanent.

Grossi also noted that "the station and its physical integrity have been violated several times accidentally and deliberately".

By the way, Ukrainian and international media journalists were not allowed into the plant, and IAEA representatives did not intervene. In other words, only Russian propaganda media covered the visit.

A report with conclusions on the plant inspection will be ready early next week, and the UN Security Council will hear a report on the results of the visit on 6 September. Then we will know whether Ukraine's hopes are justified. And whether the IAEA follows the infamous example of Amnesty International, whose report accused Ukrainian defenders of endangering civilians...

What the world is calling unprecedented nuclear blackmail and nuclear terrorism has lasted six months. The invaders first shelled and then seized the Zaporizhzhya nuclear power plant a week after the start of the full-scale invasion, that is on 4 March, the press service of the Zaporizhzhya regional military administration said, citing the State Inspectorate for Nuclear Regulation of Ukraine. The national etomic energy company Energoatom confirmed the report.

"The ZNPP administration office and the entrance to the plant are under the control of the occupiers. The plant personnel continue to work at the power units, ensuring the stable operation of the nuclear units. The radiation background is normal," the company said. Later, Energoatom reported on the losses among the Ukrainian military after the Russian assault on the Zaporizhzhya nuclear power plant at night. Three defenders of the plant were killed, two were wounded. "The heroic defenders of the plant destroyed one enemy tank with the entire crew," the statement read. The station personnel were not injured.

Energoatom also warned that the loss of nuclear fuel cooling capability would lead to a significant radioactive release into the environment. Damage to the spent nuclear fuel storage facility at the Zaporizhzhia NPP site, along with the six power units, would also lead to a radioactive release. In terms of its aftermath, this kind of catastrophe could surpass all previous accidents at nuclear power plants, including the Chornobyl and Fukushima Daiichi disasters.

Ukrainian President Volodymyr Zelensky recorded a video address about Russian shelling and a fire at the ZNPP, calling on world leaders to stop Russia. Over the next six months he repeatedly called on the international community to give a principled response to the ZNPP shelling and to do everything possible to prevent a nuclear disaster.

The International Atomic Energy Agency said on the same day that because of the fire at the ZNPP caused by Russian shelling, it was launching the Incident and Emergency Centre in a 24-hour emergency operation mode.

Following the seizure of the ZNPP by the Russians, the IAEA met and adopted a resolution strongly condemning the actions of the Russian Federation and demanding "an immediate halt to all actions against and at Ukrainian nuclear facilities for their safe operation".

"In response" Russian troops entered Enerhodar, the satellite city of the Zaporizhzhya nuclear power plant. The occupiers deployed heavy equipment and ammunition directly at the ZNPP site. Later, according to Enerhodar mayor Dmytro Orlov, they placed more in the engine room of generating unit No 1.

Ukraine and the IAEA have been negotiating a possible stay of agency specialists at Ukrainian nuclear power plants since late March.

On 26 April, mankind once again found itself on the brink of a nuclear and radiation disaster as two Russian cruise missiles flew over the Zaporizhzhya NPP site at low altitude.

In late April, Zelenskyy said in an interview with Polish media that international partners had suggested that Ukraine hand over the Zaporizhzhya NPP under Russian control.

He also added that the IAEA had initially claimed that there had been no hits on the ZNPP, but this was allegedly untrue.

According to Energoatom's acting president, Petro Kotin, there were about 500 occupiers with equipment, explosives and weapons at the Zaporizhzhya plant site. According to him, the plant personnel are working under great pressure from the invaders. Kotin's statements are backed up by an abundance of reports about the bullying, kidnapping and even killing of the plant workers.

The IAEA's management started organizing a mission to the Zaporizhzhya nuclear power plant in June. It should be noted that the agency has not made any statements with clear assessments of the situation until then. However, the agency did not make any statements afterwards either. It was not until 3 August that Rafael Grossi, head of the IAEA, said that the Zaporizhzhya nuclear power plant was "completely out of control".

Stressing that the situation at the Russian-occupied facility was becoming more dangerous by the day, he asked Russia and Ukraine to allow experts to visit the ZNPP immediately to stabilise the situation and avoid an accident.

According to Grossi, the situation is paradoxical because the ZNPP is controlled by Russia and nuclear operations are managed by Ukrainian personnel. This leads to inevitable clashes and possible violence, and the IAEA's contacts with plant personnel are "imperfect" and "heterogeneous".

On 5 August, the occupiers shelled the Zaporizhzhya NPP twice a day, damaging the nitrogen-oxygen plant and the combined auxiliary building. Since then, the ZNPP and Enerhodar have been shelled continuously. Experts predict almost every day, depending on the wind direction, how the nuclear cloud would move in the event of a disaster. It is predicted that it will not only cover the south of Ukraine and neighbouring Russian regions in any weather but will also affect European countries.

However, on 10 August, Rafael Grossi said that there was no direct threat to nuclear safety at the Zaporizhzhya nuclear power plant. At the same time, he again expressed serious concerns about the situation at the plant and said that an IAEA expert mission should arrive at the plant as soon as possible to help stabilise the situation.

On 15 August, the Ukrainian parliament decided to address the UN, the European Union, the European Council, OSCE in Europe, parliaments and governments of the IAEA member states, asking them to condemn the act of nuclear terrorism carried out by the aggressor state at the Zaporizhzhya NPP in the city of Enerhodar in Zaporizhzhya Region. The Ukrainian parliament called for recognizing the actions of the Russian Federation in occupying, mining and shelling the ZNPP, which endangers the safe existence of the world, as an act of nuclear terrorism, applying sanctions against the entire Russian nuclear industry and suspending Russia's privileges and rights as an IAEA member, etc.

The Russian military has made the territory of Europe's largest nuclear power plant a war zone, Volodymyr Zelenskyy said in his address to the UN Security Council. He recalled that one reactor exploded in Chernobyl, while there were six of them at the Zaporizhzhya plant.

A green energy hub instead of Russia's dirty energy resources

Russian shelling on 26 August left all power units at the Zaporizhzhya nuclear power plant disconnected from the grid for the first time in its history. The plant was once again one step away from disaster. Subsequently, the plant's employees managed to reconnect two power units to the grid.

After that the IAEA mission, despite Russia's demands not to go through Kyiv, went to the ZNPP - and specifically through the Ukrainian capital.

So, we are awaiting the results of this visit. And one more detail:

On 2 September, the Ukrainian Cabinet of Ministers imposed sanctions on 700 individuals and legal entities linked to Rosatom. A certain Renat Karchaa is mentioned among them. The Russian state media describe him as a "nuclear expert" and an adviser to the head of Rosatom. It was he who gave a tour of the Zaporizhzhya NPP to Rafael Grossi, head of the IAEA, accusing Ukrainian troops of regular shelling of the nuclear plant. Judging by some details of his turbulent biography published by Mediazona, this man is an expert of extremely broad profile, a figure in a criminal case and a participant in dubious deals. Whether the head of the IAEA will believe this "tour guide's" explanations remains an open question.

President Volodymyr Zelenskyy said at the Ambrosetti Forum that if the ZNPP returns to safe operation, Ukraine can replace Russia as an energy supplier and become a green energy hub for Europe, replacing Russian dirty energy resources in different senses of the word. He also expressed his hope that the mission adheres to what the parties have agreed and what is in the interest of the entire international community.

The military of a terrorist state cannot stay at a nuclear power plant. There are situations when the fate of an entire continent depends on keeping one's word. This is exactly the situation now, the president stressed, because the reputation of no company, no country will endure radiation sickness.