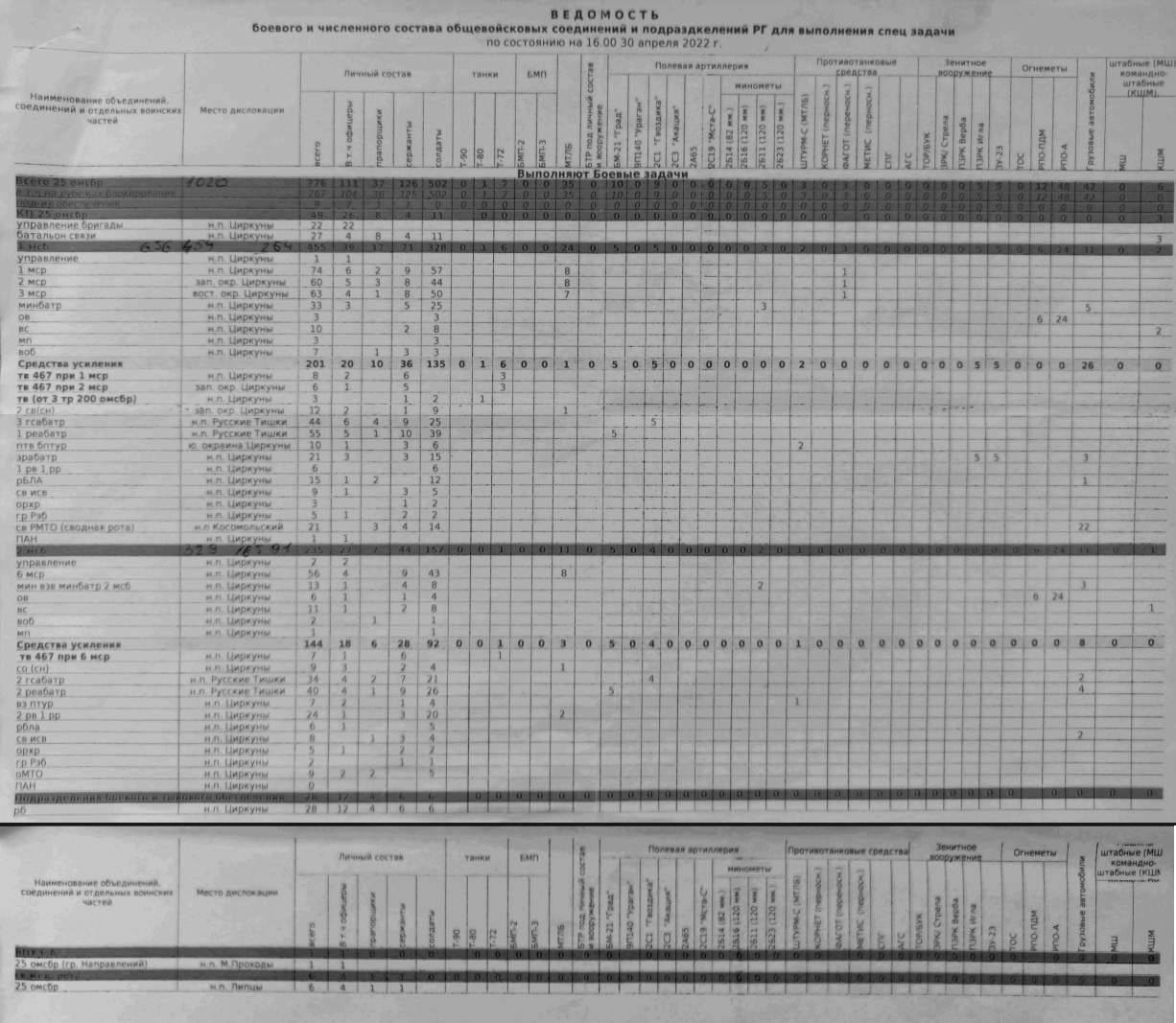 The 25th Sevastopol Red Banner Detached Guards Motorized Rifle Brigade named after the Latvian Riflemen is a tactical unit of the Russian Ground Forces, conventional name - military unit 29760, which is part of the 6th Combined Arms Army of the Russian Armed Forces' Western Military District. The permanent deployment site is the town of Luga, Leningrad Region. 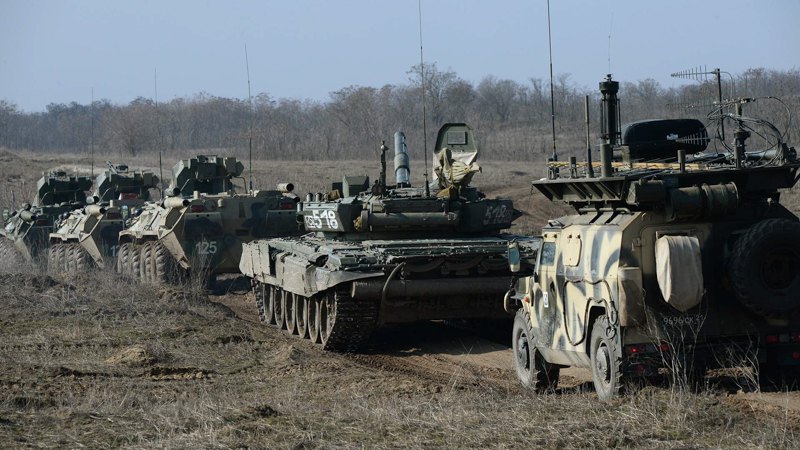 And then this brigade found itself near the village of Tsyrkuny, Kharkiv Region, and there was no warm welcome. After the inhospitable reception, the brigade commander managed to scrap together what was in his disposal into two battalion tactical groups:

- 1st Battalion Tactical Group: the 1st Motorized Rifle Battalion consisting of three companies and other regular battalion units, reinforced by two sniper squads, the 2s1 battery, the BM-21 battery, the Shturm anti-tank guided missile system platoon, the Tunguska anti-aircraft battery, a reconnaissance squad, an UAV maintenance team, a bomb disposal detachment, a CBRN detachment, an electronic warfare detachment, a combined MTZ platoon and a forward air gunner. There was a problem with tanks, therefore the group got a reinforcement in the form of a tank platoon from the 200th Motorized Rifle Brigade (twice defeated near Kharkiv, by the way), consisting of ONE tank and two tank platoons from unknown body with number 467 (six tanks); the number of BTGr personnel is 656 servicemen in seven tanks, 24 MT-LB, 5 BM-21, 5 2s1, three 120-mm mortars, two Shturm anti-tank guided missile systems and five ZU-23-2s.

- 2nd Battalion Tactical Group: the 2nd Motorized Rifle Battalion consisting of ONE company, remnants of other regular battalion units, reinforced by a sniper squad, a 2s1 battery, a BM-21 battery, an anti-tank guided missile system platoon, a reconnaissance platoon, an UAV maintenance team, a bomb squad, an MTZ detachment and a forward air gunner; the situation with tanks is even worse than in the first BTGr: the group was given a tank platoon consisting of ONE tank. The BTGr personnel strength is 245 troops with one tank, 11 MTLBs, four 2s1s, five BM-21s, two 120-mm mortars, and one Shturm anti-tank guided missile system. 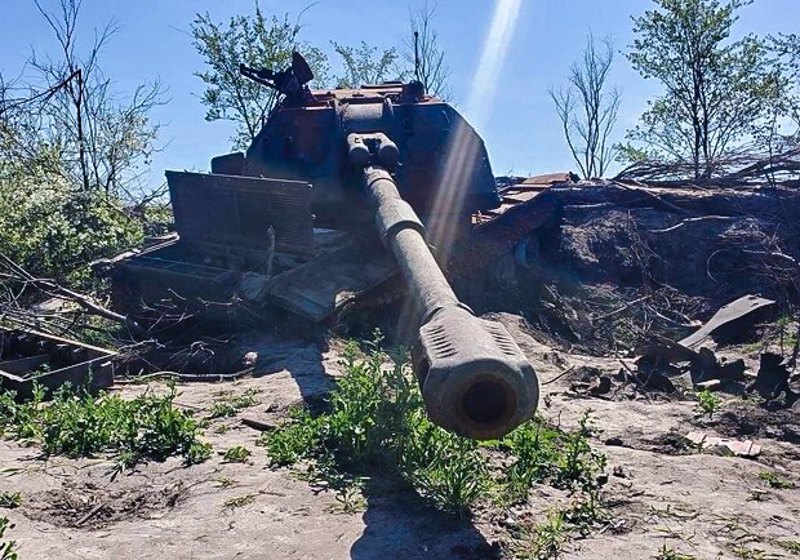 What conclusions can be drawn from this?

First. In the military art of the Russian Armed Forces and troop practice, there is a considerable gap in the understanding of the concept of a "battalion tactical group" and their practical use: Russian military science acknowledges the existence of this form of using combined arms units, but combined arms commanders continue to create and use reinforced motorized infantry battalions on the battlefield. The difference is enormous: a BTGr is formed to autonomously fulfil a particular tactical task, which dictates which particular tools a BTGr has in its disposal for that purpose, while the battalion is provided with reinforcements depending on the direction in which it operates (main or other) under centralized command (this is indicated by the composition of the reinforcements which are of the same type). Note that the aforementioned reinforcements in the BTGr should be able to operate autonomously, performing their specific tasks for the benefit of the BTGr as a whole.

Second. As of the date the table was drawn, the brigade engaged 776 servicemen (43 % of the peacetime strength) in combat operations, i.e. 57 % of personnel either cannot be engaged in combat operations for organizational reasons, or are not physically capable (dead or wounded). The Russian Armed Forces' General Staff did not take the risk of transferring the brigade to wartime manning, because it is a special military operation, and not a war. In addition to this, it appears that the peacetime staffing does not allow the Russian brigade to be autonomous and effective on the battlefield in peacetime.

Third. All 40 tanks are missing from the combat mission area (all available tanks are provided by other military units). Present on the battlefield are 35 out of 160 MT-LBs, 9 out of 36 self-propelled howitzers, 10 out of 18 MLRSs. It is difficult to say unequivocally where the other equipment has ended up, but it can be assumed that if the 3rd Motorized Rifle Battalion, a tank battalion and the 2nd Artillery Battalion have not arrived in Ukraine, losses of armament amount to about 60% of armoured combat vehicles and 40-50% of artillery. 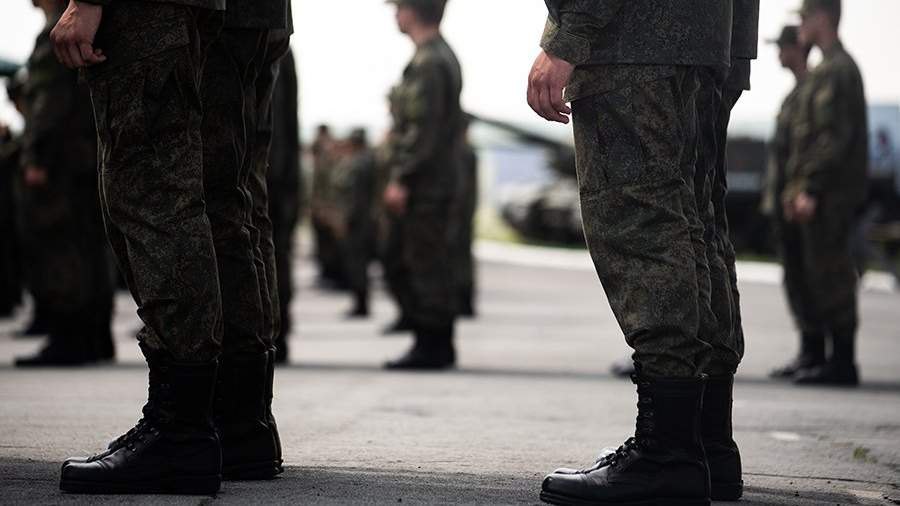 
Fourth. Out of 207 servicemen of the brigade's communications battalion, as many as 27 persons (13% of the staff) and six communications systems of various purposes ensure control over the units. Draw conclusions about the quality of command and control.

Fifth. The logistics units have no means of evacuation and field repair of weapons and military equipment, only trucks, indicating a rear focus of these units, rather than a technical or logistical focus. It becomes clear why the Russians have abandoned so much equipment with even minimal damage.

Sixth. Personnel proportions: 14% officers, 21% sergeants (warrant officers in the Russian Armed Forces remain a separate category which slows dow the formation of a professional sergeant corps) and 65% soldiers, i.e. there are 1.5 sergeants and 4.6 soldiers per officer.

The enemy has been taking tangible losses as it was already unable to assemble two full-fledged BTGrs from a motorized brigade by the end of April. This picture is inherent in almost all the BTGrs that have fought against the Ukrainian Armed Forces. At the beginning of the invasion, according to the allies' intelligence, the Russians had 176-186 BTGrs. After the operational pause in June-July, our enemy had 116 BTGrs, of which only 110 were involved in combat on the territory of Ukraine. The Ukrainian Armed Forces completely destroyed 18 BTGrs, 25 were withdrawn to the first line reserve and 15 to the second line reserve, i.e. 25 are now restoring their combat capacity and 15 are being reformatted in full. 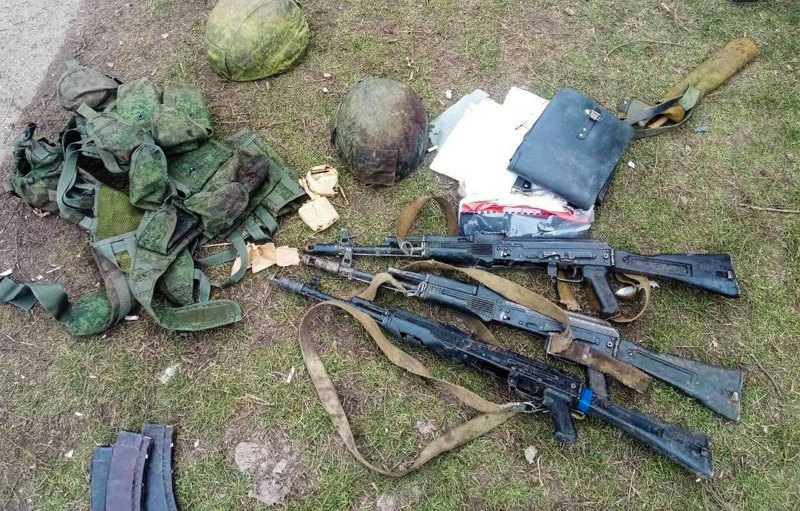 
The media recently made public a three-month military service contract found on a murdered Russian soldier. There are also short-term contracts of six months. The former involve seven days of training before being sent to Ukraine, the latter two weeks.

This demonstrates the lack of ability of the Russian military manning system to provide the troops with trained personnel. Recruitment officers are forced to resort to hole-patching tactics, enlisting everyone who can somehow be dragged to the military recruitment office. The matter is extremely complicated because, as we should recall, a "special military operation" is not a war, so mobilisation cannot be declared, and the state cannot prosecute any kind of person for avoiding signing a contract.

Another way of patching up the holes is the formation of "volunteer" battalions by the constituent entities of the Russian Federation and their subsequent dispatch to Ukraine. For example, battalions named after St Petersburg, Kronstadt, Neva, Pavlovsk and two artillery battalions - Nevsky and Ladozhsky - are being formed in Leningrad Region and will most likely be used to replenish losses, in particular in the 25th Detached Mechanised Rifle Brigade. 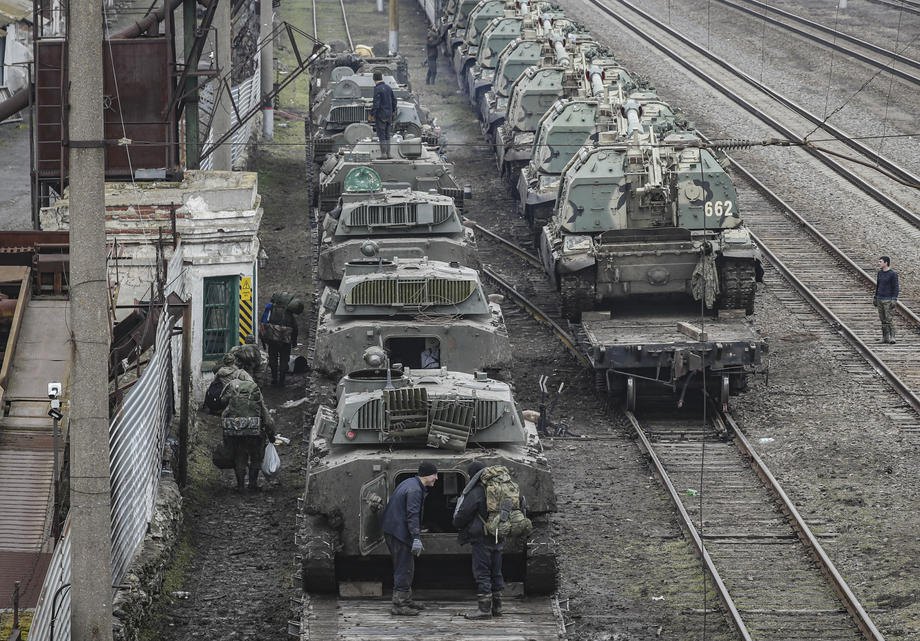 
According to an assessment by Austrian military expert Tom Cooper, aged troops with bellies and old gear like knee-high leather boots are gradually becoming average Russian servicemen in Ukraine. They are normally over 40, with machine guns older than their owners, wearing 1968 helmets, rudimentarily trained to shoot in the direction of the enemy, to move around the battlefield. Another of their defining traits is their desire to solve their financial problems by killing citizens of a neighbouring state.

The picture we have painted here shows that the former "world's second army" is incapable of showing anything new in the art of warfare on the battlefield and will continue to acquire more meters of Ukrainian land at snail's pace, realizing its quantitative advantage in at least something, paying an unacceptably high price for these meters – with the lives of its hapless citizens, who will respond to the call to settle accounts with the collectors by serving in the Russian armed forces, and with huge money wasted on the destroyed military equipment and colossal resources thrown away on the war. 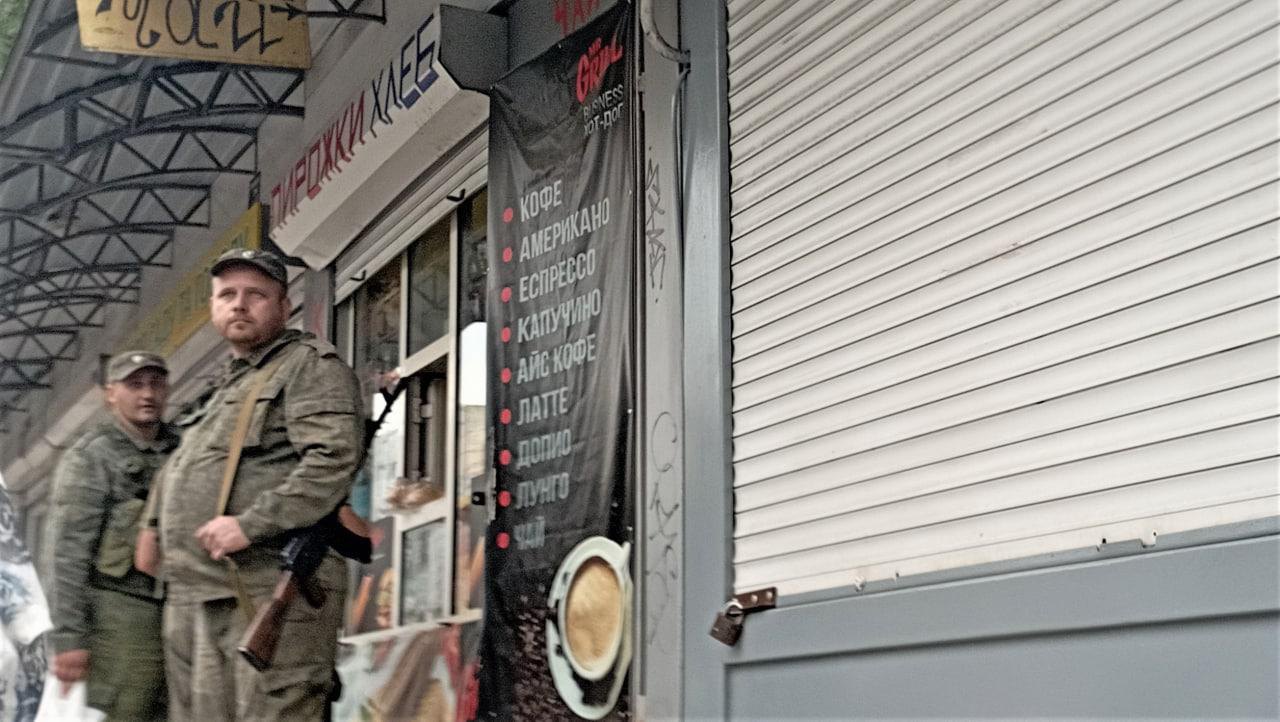 Forecast for autumn (in broad strokes): the enemy will try to reach the borders of Donetsk and Luhansk regions and hold on to the right bank of the Dnieper in Kherson Region, but it is not certain that it will succeed. More and more often we will see poorly trained and similarly equipped men on the battlefield posing as seasoned soldiers, combat equipment of previous generations brought back from the oblivion of careless storage. Artillery will remain the main striking force for some time and its effectiveness will be reduced due to the introduction of refurbished/upgraded models instead of the lost latest ones, the deterioration of service personnel, the degradation of cannon barrels and the growing shortage of ammunition. Against this background, the share of firing missions carried out by Russian strike aircraft will increase as they will exploit their air superiority and a certain sagging of Ukrainian air defence capabilities on the front line.