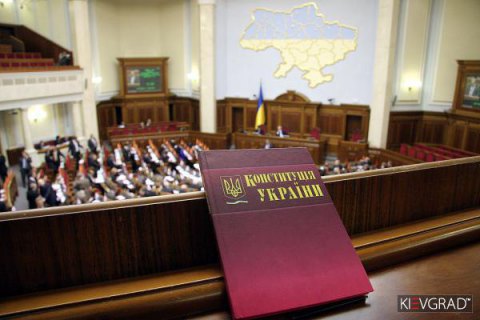 Fifty-one MPs have asked the Constitutional Court to explain the term "next regular session" in Article 155 of the Constitution to determine the deadline for passing amendments to the constitution.

Their motion to this effect has been published on the official website of the Constitutional Court.

Currently, the text of the motion can be found on the court's website in the "Being considered by court" section.

According to Article 155 of the Constitution, the bill on amendments to the constitution, which was preliminarily approved by 226 MPs, shall be considered passed if it is supported by at least 300 MPs at the next regular session.

"Due to time restrictions with regard to the implementation of necessary procedures to complete the adoption of bill No2217a, it may happen that the bill will not be considered during the third session. While implementing the above mentioned clause, we have across some questions... does this mean the session which is exactly the next in sequence... or any other next session," the motion reads.

As reported earlier, the presidential administration decided to put the adoption of the constitutional amendments on the back burner for two reasons.