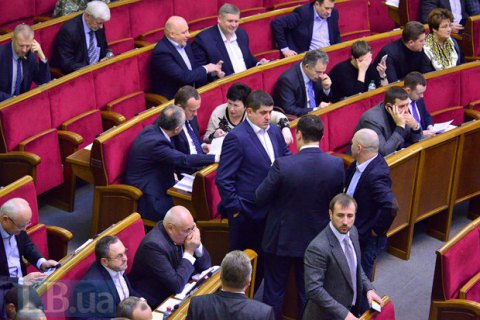 The presidential administration has decided to put the brakes on the adoption of constitutional amendments. There are two main reasons for this. The first one has to do with concerns that if constitutional amendments containing a clause on the "special status of Donbas" are indeed passed, Ukraine will lose an important trump card in talks with Russia. It will also complicate the country's international position. The second reason has to do with the coalition simply lacking 300 votes to have them passed, while the presidential administration cannot afford such a failure.

LB.ua has learned from its sources that the process will be protracted by sending the Constitutional Court a motion on behalf of MPs (from the Petro Poroshenko Bloc and the People's Front") seeking an explanation of the well-known clause saying 300 votes "for" are collected at "the next regular session of the Supreme Council" [Article 55 of the Constitution of Ukraine]. A traditional algorithm for correcting the constitution is as follows: a simple majority of 226 votes - approval by the Constitutional Court - 300 and more votes "for" in parliament. Until today it had been believed that the first and second votes should be held at two consecutive plenary sessions. However now MPs are not so sure about the procedure. The word "next" sparked a debate among MPs: is this literally the next session (chronologically) or any other next session? Therefore MPs are collecting signatures under a motion on the matter which will be submitted to the Constitutional Court in a day or two.

Translator's note: the Ukrainian word "cherhova sesiya" can be translated both as "next session" and "regular session", hence the ambiguity.

If the Constitutional Court confirms the "any other next session" theory, it will allow the current constitutional amendments to be delayed indefinitely.

LB.ua has asked three MPs, who signed the motion, to explain their position.

"The motion has to do with the need to explain the time framework when changes to the constitution can be put for consideration. To ensure that we have all exhaustive arguments before we take any decision," MP Iryna Fryz from the Petro Poroshenko Bloc said. She flatly rejected an opinion that the adoption of the amendments was being deliberately protracted.

"No, the process is not being slowed down. We must have a clear understanding of the meaning of "the next session" to remove any questions regarding the lawfulness of decision making in the future," she insisted.

Parliament will have the last plenary week of the current session next week.

"Since the plenary week starts on 22 January, I think we will not have to wait for a month for the Constitutional Court to announce its decision. It will be available much earlier," she concluded.

Her faction colleague, MP Oleksandr Tretyakov, has confirmed the motion has already been signed by more than 45 MPs, as required by law.

His explanation of the need for legal explanation was very laconic: "I just want to know what the next session is. Just to know."

He also insisted that this initiative was not aimed at putting the constitutional amendments on the back burner.

"This [protracting the amendments] does not depend on us," he said,

He also rejected a suggestion that the motion was prompted by the lack of the required 300 votes.

"I think there are 300 votes in parliament. We simply want to know that the next session is, it is a normal question. I just want to know," he said.

MP Viktor Chumak from the Petro Poroshenko Bloc, who LB.ua believes to have signed the motion, was a little more sincere.

"The motion will be submitted to the Constitutional Court not to lose the prepared amendments to the constitution, which can provide a strong negotiation position in the Minsk process. The constitution says that "regular sessions" start on 2 February and 2 September [the first Tuesdays in February and September] every year. Hence the question: which session should be considered "regular" - the current one or the one which starts in February? [If the latter is true], the changes to the constitution can be adopted from February to September," the MP said.

He did not deny that the step would slow down constitutional reform.

"I would not say the process was being deliberately slowed down. I would say more time is provided to have it implemented. We will see very soon what results the motion to the Constitutional Court will have," he added.

He confirmed that the absence of the constitutional majority to pass the amendments was one of the reasons behind the slowdown of a constitutional process.