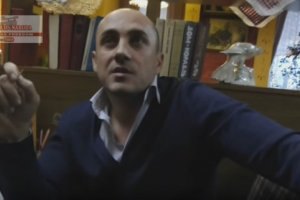 The Security Service of Ukraine (SBU) has detained Serhiy Korsunskyy who is justifiably suspected of involvement in the Luhansk People's Republic (LPR) terrorist organization, SBU spokesperson Olena Hitlyanska has said on Facebook.

The SBU detained Korsunskyy in Poltava Region and is now bringing him to court for further investigative actions.

One of the participants in the seizure of the SBU office in Luhansk and later one of the LPR chieftains, Serhiy Korsunskyy, was spotted in a Kiev restaurant on 2 February.

According to information from open sources, he was one of the LPR leaders until mid-April 2014. He commanded one of the two main paramilitary groups, the Army of the Southeast. After a conflict with Oleksiy Mozhovyy's People's Militia, Korsunskyy left the separatists.