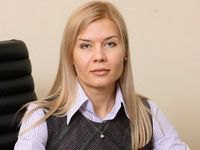 The head of the Initiative Citizens group, Mariya Cehernkova, was detained in Donetsk late on 29 January, fellow group members have said on Facebook.

Activist Yevhen Shybalov suggested she may have been taken by the MGB.

"'I was taken to the MGB', that's all she managed to text us. Then she went off the radars," he specified.

He added another activist from the same group, Enrike Menendes, was at risk.

The OstroV news website said that in November 2015, Cherenkova was banned from entering the occupied territory, which effectively left her locked in as she had to take care of a sick relative.