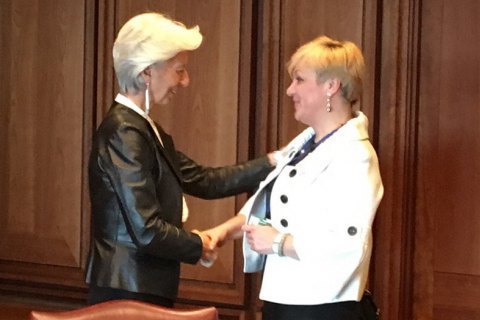 A mission of the International Monetary Fund (IMF) is to visit Ukraine soon to examine the economic situation and meet with the newly appointed government, Ukraine's embassy in the United States has said in a press release.

This was the result of talks between IMF Managing Director Christine Lagarde and Governor of the National Bank of Ukraine Valeriya Hontareva, the embassy said.

Speaking on the sidelines of the spring meetings of the IMF and the World Bank Group in Washington, D.C., Hontareva stressed the highest priority for Ukraine to implement the reforms foreseen by the cooperation programme with the IMF.

"Lagarde said that the IMF was prepared to continue to support our country on its path of economic transformation and stated that the IMF mission would visit Ukraine in the near future," the embassy said.

Early in April, the IMF reviewed its macroeconomic forecasts for Ukraine in 2016, having set economic growth at 1.5 per cent and inflation at 15.1 per cent. However, it kept its projections for unemployment in Ukraine at 9.2 per cent (in keeping with the International Labour Organization's methodology).

The endorsement of the memorandum will pave the way for the third tranche worth 1.7bn dollars.