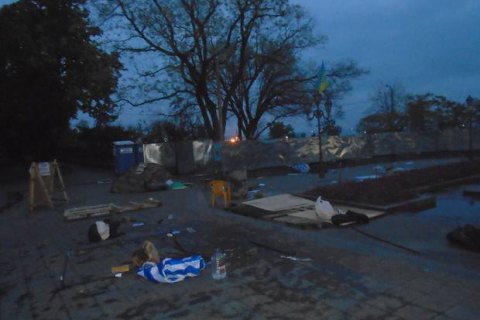 At around 4 am a few dozen young men armed with bats attacked a tent camp of opponents of the mayor of Odesa Hennadiy Trukhanov opposite the city council.

One of the activists of the anti-mayor protesters Mykhailo Holubiv provided the details of the attack on his Facebook page: "The whole thing started at about 04:00 – 04:30. The thugs came armed with bats, etc, about 25-30 people all in all. Protesters numbered around 20 people, some were sleeping. Many people are beaten, splattered with paint, the whole camp totally smashed up. Police arrived about 15 minutes after the start of the attack. Protesters caught two thugs and handed them over to police. One policeman, however hesitantly, said they detained about five people."

In response, protesters blocked all entrances to the town hall, reports 048.

The police did not interfere and restrained to protecting public order.

Some of the protesters met with the chief of the regional police, Giorgi Lortkipanidze.

The police press service confirmed that five people who were trying to disperse the tent camp mayor's office were arrested.

One of the protesters. who was severely beaten up, was reportedly hospitalized.

In the meantime, Odesa vice-governor Aleksandr Borovik came to the city hall and urged that the building should be unlocked because, as “according to the police, the situation in Odesa is expected to heat up on May 2 by visitors from Russia, so it is better to unblock the city council and not disperse the police man force."

The indefinite rally demanding resignation of the Odesa mayor Henadiy Trukhanov started on April 13. The protesters demand a probe into the mayor’s alleged dual citizenship and offshore businesses.