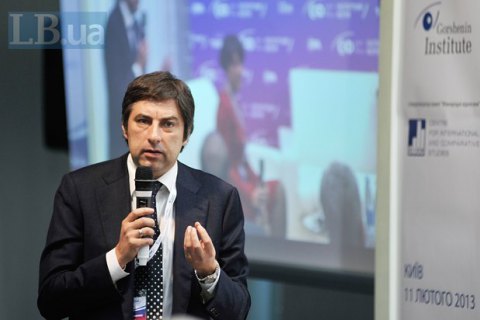 On 12 May 2016, Gorshenin Institute presented in Paris the report entitled "Ukraine two years after the Maidan" as part of a public debate organized by the Paris Analytical Centre of the French Institute of International Relations (IFRI - Institut Francais des Relations Internationales).

The reports on the political and economic situation in Ukraine were made by Gorshenin Institute President Vadym Omelchenko and the Director of International Programmes, Dmytro Ostroushko.

"Gorshenin Institute wants to thank our partners and colleagues from the IFRI for the opportunity to present an expert opinion on political and economic processes in Ukraine. Among the participants in the discussions were representatives of the Ministry of Foreign Affairs, Ministry of Defence and the French Ministry of Economy, the National Assembly, experts and journalists. Representatives of France's largest companies and financial institutions also have demonstrated great interest," said the president of Gorshenin Institute, Vadym Omelchenko. "Judging by the number and quality of the audience who participated in the event (and it's more than a hundred people, in spite of the evening after the working day), the interest in Ukraine and Ukrainian issues does not subside. A big 'hello' to everyone who talks about certain fatigue from Ukraine and Ukrainians. It is remarkable that most of many questions that we were asked concerned the economy of Ukraine and the possibility of cooperation. That is why French politicians and businessmen are first and foremost interested in the political situation, legal situation, including the judiciary, financial sector, the state of the business, industry and agriculture."

Omelchenko also noted a very significant fact: among more than 20 questions asked by the participants in the discussion, the issue of the Minsk agreements was raised only once and only about the perception of these agreements in the Ukrainian society. "But it is also true that this question was the first to be asked when we met French officials. This is quite understandable, since in times of crisis it is European countries that stand to lose the most. All others, in one way or another, have their benefits and tend to adapt to catch good fish in troubled waters," said the president of the Gorshenin Institute.

He said that during the visit to Paris the representatives of Gorshenin Institute had a lot of meetings and exchanges of opinions with politicians and officials. "Sometimes it rather looked like debates, in the course of others we discussed the possibility of arranging new formats, sometimes they tried to convince us that the Minsk agreement is the only opportunity and a unique roadmap. We don't know how effective these arguments will prove for the Ukrainian leadership, but we, as experts, were pretty hard to convince about the effectiveness of the Minsk agreements. We believe that the sooner settlement options will begin to be discussed the better," said Vadym Omelchenko. "We are convinced that the Minsk format has exhausted itself and we need to promptly start discussing different options of a settlement in various formats, including new ones. That's if our Western partners still do consider Ukraine a sovereign state, de jure and de facto."