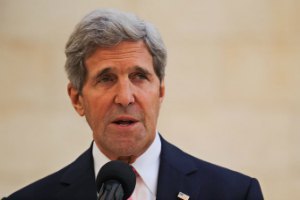 US Secretary of State John Kerry said on 19 May that a key aspect of NATO's response to Russia's actions in Ukraine is to meet the Wales commitments on defence investments and to continue to strengthen its deterrence capabilities through a "more robust forward presence".

He was speaking after the first day of ministerial talks at the Alantic alliance's Brussels headquarters.

"NATO has been and has to be ready to, engaged in and willing to be open to a political dialogue with Russia but we refrain from the business as usual until Minsk commitments are fully implemented. That is critical," he said.

He added: "And make no mistake. We will not recognize the annexation and the occupation of Crimea."