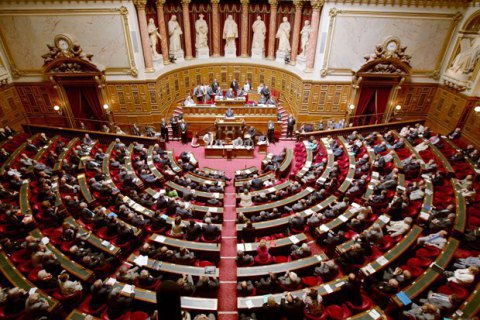 The French Senate has voted overwhelmingly to urge the government to gradually reduce economic sanctions on Russia, in a sign of growing opposition to sanctions in Europe.

The resolution to "gradually and partially" lift sanctions was approved 302-16 on June 8 despite opposition from France's Socialist government, which said the restrictions can be relaxed only when the Minsk peace deal for Ukraine is fully implemented.

The vote was nonbinding but a barometer of rising frustration with the sanctions, which are due to expire next month. The European Union was Russia's biggest trading partner before 2014 when Russia's aggression in Ukraine prompted it to impose sanctions ranging from banning oil equipment exports to barring Russian banks from getting loans.

In retaliation, Russia banned all food imports from the EU.

As a result, EU agricultural exports to Russia plummeted by 50 percent last year and imports from Russia dropped by a third compared with 2013.

French auto and food companies have suffered because of the sanctions and Russian embargo and have quietly lobbied French politicians to lift them.

Pro-Russia lawmakers in the parliament complained that the sanctions are hurting the French economy and argued that Europe should not follow U.S. policy on Russia.