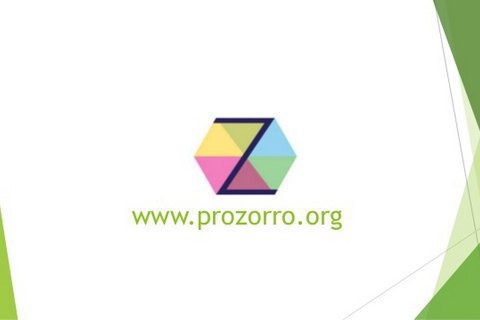 From August 1, the electronic system of public procurement ProZorro became mandatory for use in Ukraine, the official website of the Ministry of Economic Development and Trade stated on 1 August.

"On August 1, 2016, Ukraine completed transition to electronic public procurement through ProZorro system. From April, all the tenders exceeding the thresholds of 200 thousand hryvnya for goods and and 1.5m hryvnya for works invited by central governmental agencies, major state-owned enterprises and natural monopolies. ProZorro becomes mandatory for the use by local authorities, utility companies and other organizations that use taxpayers' money. " the report reads.

From now on, all tenders that exceed the thresholds, should be carried out through ProZorro. A public customer first post tender invitations on ProZorro, thus announcing the purchase. Then it answers the questions of suppliers and than conducts electronic auctions or other procedure provided for by the law "On public procurement".

After the winner is announced, the customer is obliged to post the text of the contract with the supplier. The payment procedure can also be traced through the system, provided it is carried out by the State Treasury.

Regarding subthreshold purchases (below 200 thousand hryvnya for goods and 1.5m hryvnya for services), the use of ProZorro is not mandatory but 'highly desirable'," according to the ministry.

"Over the 12 months the ProZorro pilot project has been in effect, savings have exceeded 1bn hryvnya (the savings totalling 2.6bn hryvnya as of today). Therefore we call on all responsible customers to use ProZorro when even handling purchases worth small amounts of money. This is easy, user-friendly and advantageous," the ministry quoted deputy minister Maksym Nefyodov as saying.

The Verkhovna Rada adopted on 25 December, 2015 a law establishing a requirement for all public procurement to be made through the ProZorro system from April 1, 2016 for ministries and large state-owned companies, and from August 1 - for all state-owned companies and government agencies. It is expected that by the end of 2016 the use Prozorro would save about 5bn hryvnia, and 50bn hryvnia in 2017.

The US development agency USAID has pledged to provide the government of Ukraine 14m dollars to further promote ProZorro.