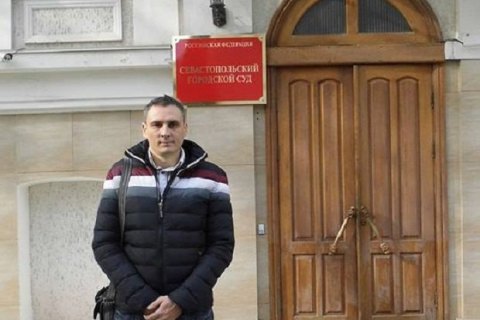 On 16 December, officers of the Russian Federal Security Service (FSB) in occupied Sevastopol detained pro-Ukrainian activist Ihor Movenko at his workplace and confiscated his office computer, the Crimean Human Rights Group has said on Facebook.

"They opened the door with the key they took from Ihor, although I was home. By that I already knew that he was taken to the FSB because his employees told me this over the phone. They read the search warrant issued by court, but did not give me its copy," she said.

According to her, her husband managed to tell her that he was beaten. He said he was told he would be sent to a remand centre unless he confesses to extremism.

Valentyna said the FSB confiscated a laptop, hard drives, SIM cards and the packaging from a SIM kit as well as Ihor's mobile phone.

"They were very curious about Ukrainian flags we have in our flat. FSB employees told me that they are taking Ihor to the Sevastopol FSB and unless he pleads guilty, a court will remand him in custody as a measure of restraint. If he confesses, he is facing a pledge not to abscond or a house arrest," she said.

Earlier, the Russian FSB called Ukraine a "source of the terror threat" which its chief believes to be coming from Kyiv.