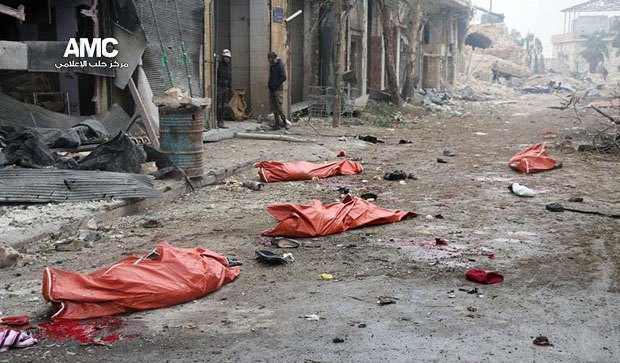 While Europe is busy putting on Christmas decorations and Santa Claus's red suits, Aleppo's streets are getting red from blood which cannot be covered by thousands of tonnes of dust from the buildings bombed to ruins by the Russian aviation. Aleppo's humanitarian tragedy is nowhere near its end, it can still claim human lives with the coming cold spell, comparable with that in early November in Ukraine, during which it is not that difficult to die of hypothermia if you do not have a shelter to live in. But the most important thing to be expected is a strategic confrontation of interests between Russia and Iran in Syria.

Separate talks between Moscow and the Syrian opposition in Turkey

For the past months, Al-Assad's troops have been on the offensive against Aleppo, gradually capturing the city's districts with the Russian air support. Efforts to arrange for corridors which opposition units and civilians could take to leave the city appeared to be the heart of the drama.

The Russian aviation incessantly pounded Aleppo, saying cynically that it was only targeting the terrorists and even more cynically brushing off any responsibility for the mass casualties among civilians. This is a visible part of the picture. 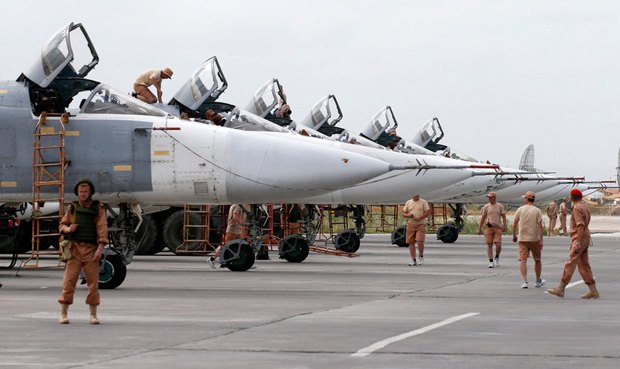 Photo: EPA/UPG
Russian bombers at a Syrian military base

Much less attention is paid to what I am going to talk about below, although it is open information which one should still be able to read between the lines. Although Moscow officially describes all armed opposition groups as terrorist organizations which it legally banned, the Russian special services have built very close contacts with some of these groups. These contacts are so close that with Turkey's help, Moscow initiated separate negotiations in Ankara on the conditions of rebels' evacuation from Aleppo. A very close parallel that springs to mind is the evacuation of armed units of the Palestine Liberation Organization from Beirut in 1982 after the city was stormed into and overtaken by the Israeli army led by Ariel Sharon. Instead of physically annihilating the units of Yasser Arafat, Sharon, also known as Bulldozer, allowed the Palestine Liberation Organization to leave for Tunisia by the sea.

With their bombs, the Russians managed to force the Syrian opposition to the negotiations table where rules are set by Moscow. Or at least it tries to set them. Nixon used similar methods to push the North Vietnam leaders to talks in Paris in 1972. The Hanoi authorities signed the peace agreement on US terms, after which carpet bombing by US aviation destroyed a significant part of the North Vietnam Republic infrastructure in the course of the Linebacker II operation, which went down in history as the Christmas Bombing. Thus, they happened around the same time as the Aleppo bombings.

In Ankara, the Russians and the rebels signed three agreements on the terms and schedules of Aleppo evacuation, with the fourth deal being signed just recently. What is most outrageous and extraordinary is that Russia demanded that the opposition recognize it not as a party to the conflict but as a peace mediator. The opposition agreed and, being cornered, signed the deals. Thus Russia is washing off its hands and leaving the doors open to further cooperation with the opposition. 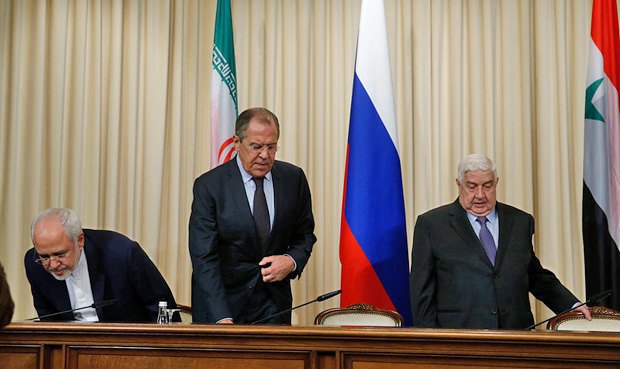 In reality, Al-Assad and Iran are reneging on the agreements while Russia is trying to save its face by making false statements. Russian army nurses were killed on 5 December as a result of a mortar attack on a Russian military hospital in Aleppo. The Russian Defence Ministry and the Foreign Ministry immediately put the blame for the attack on the Syrian opposition and even on the USA. They lied because the hospital was attacked by the Hizbullah, a pro-Iranian armed unit whose advance is supported by the Russian aviation.

Despite the signed agreements on peace and evacuation of opposition units and civilians, they are constantly breached by heavy fighting. Again, Russia in its statement points the finger at the Syrian opposition. In fact, they know that harassing fire is carried out by its Iranian allies. And the Russian aviation has already dropped its bombs directly on them.

Al-Assad's revenge to Putin in Palmyra

As the military operation to capture Aleppo was nearing completion, Al-Assad did his best to make it look like his personal military triumph. What he cared about is to make sure that the Russians are not there to disturb him. That is he directed a repeat capture of Palmyra by Islamic State.

For Putin and his troops, it was a sensitive kick. Palmyra is important not only to the UNESCO. It is the only place in Syria which sounds familiar to people in the West who studied ancient history in elementary schools. Therefore Palmyra was chosen as a victim of Islamic State to send a direct message to the West which saw these ruins on the picture in a school book. And it was to bless Putin's mission against this evil. 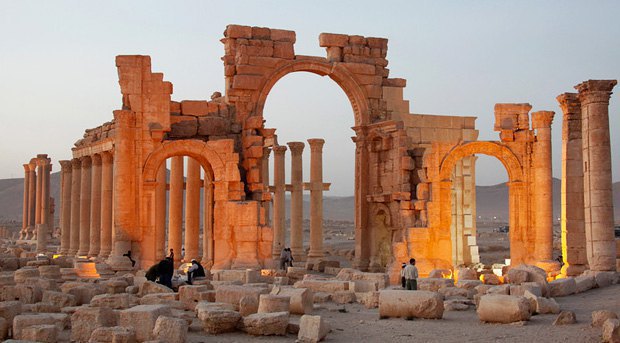 Photo: EPA/UPG
The ancient city of Palmyra and what remained of it

Strategically, Palmyra is not just absolutely unimportant. Palmyra is an absolutely open desert terrain which is only good for producing Hollywood Western films, but even Erwin Rommel or, even more so, Ariel Sharon, who was mentioned above, would not have been able to carry out any warfare there using non-regular units driving pickup trucks. Nevertheless, because of its name and cultural value to the West and the world, it was decided to play a drama with the capture of Palmyra by Islamic State. Palmyra is the only location which Islamic State snatched namely from Al-Assad. The rest of the territory was taken over as a result of fighting with the moderate opposition.

Right after Russia got directly involved in the Syrian war, Palmyra's "liberation" performance was staged to improve Putin's image. And Putin's friend Roldugin gave a concert there. In fact, Al-Assad's surrender of Palmyra to Islamic State and its later liberation were clearly coordinated by Damascus and Islamic State.

Palmyra's repeat capture by Islamic State caught the Russians off guard. While the control of Palmyra was changing hands, the Kremlin held the Day of Hero celebrations in which mysterious mercenary Dmitriy Utkin, aka Wagner, wearing the For the Liberation of Palmyra medal on his chest, played a central part. Utkin is believed to play a critical role in storming the city, although Islamic State militants simply left it in an organized manner.

Moscow and Bashar al-Assad traditionally blamed the USA for the repeat fall of Palmyra. Meanwhile, everyone is perfectly aware that it was Al-Assad's personal message to the Russian General Staff's Main Intelligence Directorate for building connections with the armed Syrian opposition.

The Russians, for their part, had no idea what was going on in Palmyra, broadcasting the absolutely false official statements of the Syrian authorities for half a day, which took a while to admit the fall of the city. Now Islamic State is besieging the T4 airbase which the Russian aviation used in the Palmyra operation. 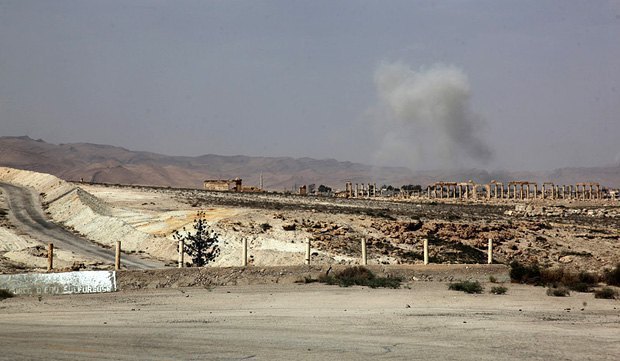 In their statements, Russian servicemen also shift the blame on the Al-Assad troops, although they are fully aware that after this, the Russian intelligence cannot dare to report to Putin and advise him on something. Because the Main Intelligence Directorate must be well versed in everything going on all across Syria, independently from Al-Assad. And in Palmyra, Lifenews (the main Russian propaganda channel covering the Aleppo events) did not even have its "sources".

Al-Assad not just pulled his troops from Palmyra but consciously left behind a hefty arms "cache" (Russian-made) to Islamic State which has already been deployed to Al-Bab to contain the Turkish advance against its stronghold there.

What unites the Syrian opposition is its unacceptance of Iran's domination in Syria which has already turned Al-Assad into an Iranian puppet.

The Russians paid active efforts to prevent Syria from turning into another Lebanon dominated by the Hizbullah paramilitary militia units controlled directly from Teheran. Russia pushed to strengthen the regular Syrian army subordinate to Bashar al-Assad. With no big success.

Russia and the USA fully share an opinion that Iran should not be allowed to settle in along the Mediterranean Sea. As much as Trump is loyal to Putin and Syria, he is opposed to Iran. 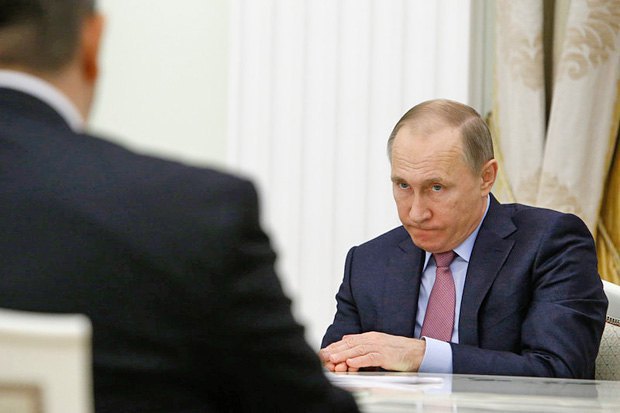 The sale of a stock in Rosneft, the main milch cow of the Russian budget, was a strategic breakthrough. It is noteworthy that it was bought by Qatar which the official Russian propaganda labelled the main sponsor of Islamic State. Although, in fact, Qatar, on the one hand, helped the Russian federal budget out with its money in a difficult moment. On the other hand, Qatar attempted to buy a softer Russian position on Syrian in exchange.

What is most interesting is that Putin will later use the same deal to buy the Trump administration at first, especially would-be State Secretary Tillerson, who is already dizzy with the smell of Russian oil dollars. Therefore Putin and Trump are quite likely to build a common platform and coalition based on efforts to contain Iran and on oil contracts for Americans in Russia.