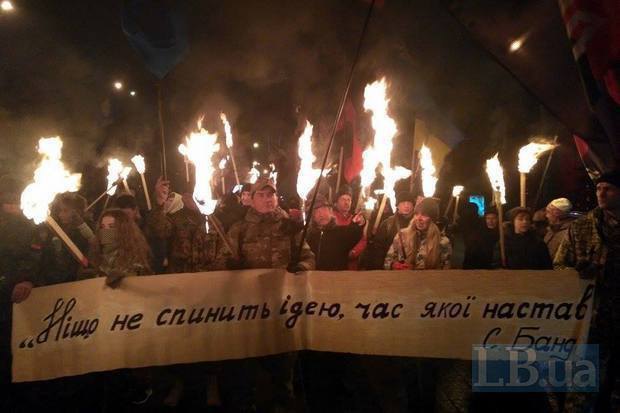 Photo: Oleksandr Rudomanov
A torchlight procession was held in Kyiv in the evening of 1 January to commemorate a leader of the Organization of Ukrainian Nationalists and political activist of the 1930s-1940s, Stepan Bandera, who was born that day in 1909.

The event has become traditional over the recent years.

In the early months of World War II he cooperated with Nazi Germany, but when he declared a Ukrainian independent state, he was arrested on 15 September 1941 and later imprisoned in the Sachsenhausen concentration camp. After the war, he was assassinated by the KGB in Munich, Germany in 1959.

In 2010, President Viktor Yushchenko awarded Bandera the title of Hero of Ukraine. After Viktor Yanukovych came to power, he cancelled this decision, saying Bandera was not a citizen of Ukraine and thus was not entitled to this title.