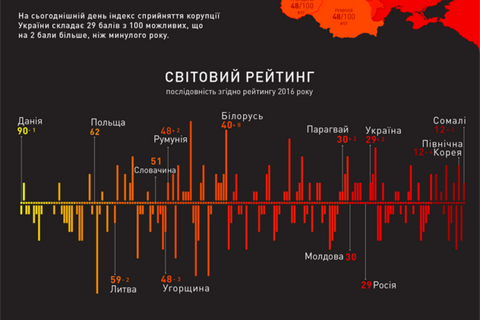 Ukraine ranked 131th among 176 countries in the world ranking of perceptions of corruption, as evidenced from a study made public on the website Transparency International Ukraine.

Ukraine scored 29 points out of 100 possible in the world Corruption Perceptions Index (СРІ) for 2016, which is an improvement of two points compared to last year. However, this meager progress is not enough for the country, the authorities of which called fighting against corruption the main priority. The progress of the anti–corruption reform resulted in an improved position in the world ranking, but the absence of an efficient judicial system and the reality of actual impunity of corrupt officials prevent Ukraine from making a huge leap forward and breaking through the 30-point barrier.

Ukraine is ranked 131 out of 176 countries in the World Ranking of Corruption Perception and shared this result with a rate of 29 points together with Kazakhstan, Russia, Nepal, and Iran.

The World Justice Project Rule of Law Index survey gave Ukraine most of the points, which is taken into account in forming the CPI. The rate of our country increased of ten points in comparison with previous years. This is connected with the reduced abuse of office in the government (the rate has improved by 14%), in police and armed forces (the rate has improved by 6%), but the situation remained the same as under the Yanukovych regime in the judicial branch of power. The World Competitiveness Yearbook survey indicates this very problem that gave Ukraine three additional points.

The Freedom House Nations in Transit survey plays an important role in civil society in the implementation of democratic transformations, which resulted in four additional points for Ukraine. The accountability of public procurement due to the ProZorro system, public funding for political parties, first NABU investigations, civil society participation in the anti-corruption reforms – experts called these very changes to be the most important. But according to the survey, the biggest challenges are the weaknesses of the institutions, called to ensure the rule of law, excessive economy regulations, and the consolidation of power in the hands of oligarch clans.

Ukraine got negative assessments from the World Economic Forum Executive Opinion Survey (-1 point) and Economist Intelligence Unit Country Risk Ratings (-2 points). Business witnessed great corruption while allocating public funds, and feels the judicial system was unable to prevent this. And due to the work of ProZorro and Dozorro systems the violations became more vivid for business and civil society, in comparison to the paper tenders. Exposure of such tenders with the help of Dozorro can considerably reduce corruption in procurement. Moreover, to solve the issue of impunity in courts, much more should be done.

In 2015 reports, Ukraine ranked 130 out of 168 in the world Perceptions of Corruption Index with 27 points.