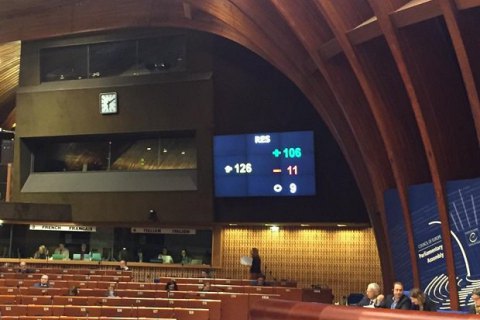 "This resolution contained only one thing that could be treated differently in political terms. It was the phrase: 'We hope that the legislation on the special status of Donbas will be adopted in the near future.' We must understand that all the documents of the resolution are interrelated and proceed from one another. In 2016, we adopted a resolution that said yes, elections should be held in this area, but the elections can be held only in conditions of security and free will. In this particular case, in view of this wording, I do not see any problem: we are happy to hold the elections in the area, but let us have control over them. Yes, there were different votes for the resolution, but everyone worked and fought for it," said Heorhiy Lohvynskyy.

He noted that the task of the Ukrainian delegation was not only to "win" but also "defend."

"We have succeeded in defending the elections in Donbas in conditions of security, having dropped this amendment, we dropped the amendment on the return of communisation, cancelled the amendments that this [the military operations in Donbas] is an internal conflict and not Russian aggression. To tell the truth, I expected that everything would be much worse. The monitoring report was an opportunity for our opponents, the agents of Russia, to sling mud at us and prove that we are all bad, corrupt, thieves and good for nothing. Europeans - and here I agree with them - are unhappy about the pace of reforms in our country. And yet, the majority of the speakers would say that Ukraine over the last three years has made more than in the previous 25 years. Our delegation - at the level of the session hall, at the committee level, at the level of our embassy and in personal conversations - had a lot to explain to Europeans. We had to convey our position and it was no easy task," said Lohvynskyy.

The director of the Institute of Sociopolitical Engineering "Dialogue", political expert Andriy Myselyuk, noted that at the current session of the PACE, Russia, which pointedly takes no part in this democratic institution, through its representatives and supporters was trying to push through the amendment on the elections in certain areas of Donetsk and Luhansk regions.

"Russia did this in order to show that the PACE makes Ukraine take steps that are not only contrary to local agreements, but also are fully consistent with the interests of Russia. This perfectly fits the logic of Russia, which has recently been brilliantly using such tools as part of its hybrid warfare. Using the weakness of democratic institutions and procedures, the Russian are skilfully bending many of the processes in their favour," he said.

The political expert believes it is utterly important that Ukraine responded in kind and technologically defeated Russia and its supporters. "When the deputy from Germany Andrej Hunko and Jordi Shukla of Spain, who was the rapporteur on the election issue, made their presentations, the Ukrainian delegation took advantage of a purely procedural amendment that verbal motion cannot be accepted if more than 10 PACE deputies oppose it. The votes of several Ukrainian deputies and our pro-Ukrainian-minded supporters were enough to remove the proposal on elections off the agenda. Ukrainian MPs deserve an applause because they acted technologically and to the hilt by using Russia's own weapons to beat their opponents in the PACE and scrap the disadvantageous amendment," said the expert.

In the opinion of Myselyuk, it was quite logical for Ukraine's neighbour states to insist on including the "language clause" in the resolution.

"One can understand Romania and Poland. They perceive their own policies on the territory, which is of interest to them. This concerns primarily Transcarpathian and Lviv regions. One can hardly expect that they would support the spread of the Ukrainian language in these areas. On the contrary, the Romanian and Polish minorities are short of instruments to exercise their right to linguistic self-determination. No wonder they have pressed for the adoption of these amendments," the expert said.

However, on balance, "the resolution was rather an achievement since it marked Ukraine's progress in ensuring political institutions and adherence to electoral procedures," the expert says.

In turn, the vice-president of Gorshenin Institute, Oleksiy Leshchenko, concluded that the adoption of the resolution on Ukraine showed troubling signs for our country. "Despite the fact that the Russian delegation was not present in the session hall, the Russians were actively engaged in promoting their vision of the situation in Ukraine in the walls of the PACE. Our delegation had to take great efforts to block the anti-Ukrainian provisions of the resolution, let alone promoting and lobbying the adoption of pro-Ukrainian decisions in the Council of Europe," he said.

He noted that, given a certain loss of interest in Ukraine in the EU as well as a significant number of important developments [including elections] in the European Union in 2017, Ukrainian diplomacy will have to pay increasingly more efforts for Ukraine to remain on the European agenda.