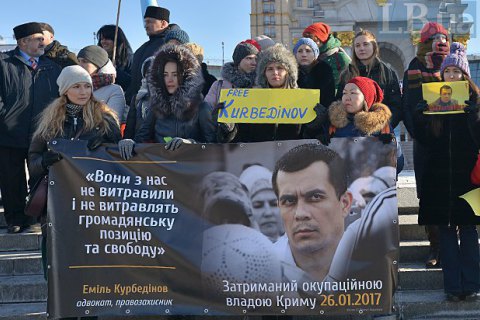 A rally entitled "Defenceless defenders" in support of Crimean Tatar lawyer Emil Kurbedinov detained by the Russian authorities was held on Kyiv's Independence Square on 31 January, an LB.ua correspondent has reported.

Over 30 right activists, representatives of the Crimean Tatar community and international organizations called on the international community to pay attention to the targeted aggression, discrimination and repressions against "dissidents" in Crimea. They put up a banner showing Kurbedinov's quote and held a little performance: a man wearing a cap of the Russian Federal Security Service (FSB) pulled people who wore Ukrainian symbols or Crimean Tatar hats from the crowd and then they "vanished" behind an improvised door with a sign "Russian world".

According to the organizers of the rally, there are few lawyers left in Crimea who could provide legal assistance to political prisoners and report reliable information on the human rights situation in the occupied peninsula.

The chairman of the Crimean Tatar self-styled government Majlis, Refat Chubarov, called on international organizations to assume a tougher stance on Russia.

"We often tell our Western partners that the time of asking and begging has long passed. Putin is a man of war who gets talked to with the force of arms only. Only then will we be able to secure the release of Akhtem Chyyhoz, Ali Asanov, Ilmi Umerov, Emil Kurbedinov and other political prisoners," he said.

The FSB detained Kurbedinov in Crimea on 26 January. The same day, a Simferopol court issued a 10-day administrative arrest warrant for him on suspicion of distribution of extremist materials.