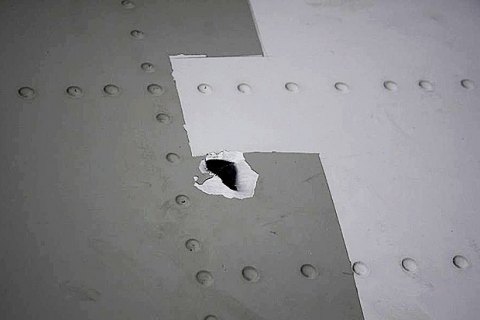 Shots were allegedly made from an antisubmarine warfare carrier of the Russian Black Sea Fleet. The An-26 was also followed by a detection radar of an air defence system. Signal rockets were fired from the ship.

The aircraft fuselage was damaged, the crew was not hurt.

It was flying above Ukrainian territory and did not have arms on board.

Later in the day, Defence Minister Stepan Poltorak confirmed that the plane was attacked. A single bullet hole was found in the fuselage upon landing. However, he said the fire was opened from Russia-seized drilling rigs.

The Ukrainian aircraft was doing a training flight.

The Russian Black Sea Fleet denied opening fire on the Ukrainian plane, according to the Russian news agency RIA Novosti.

It said that at 10.30-11.00 a.m., the An-26 "made two clearly provocative approaches at an ultra low altitude" close to the Tavrida and Krym-1 drilling rigs in the Black Sea. These are the Ukrainian rigs which were seized by Russia during the annexation of Crimea and are currently guarded by the Russian Black Sea Fleet.

According to the Russian Black Sea Fleet, during the second approach by the An-26, a guard at a drilling platform fired four signal rockets to prevent the plane's collision with the rig mast.

On 27 January, the Ukrainian diving vessel Pochayiv came under fire opened from a drilling platform in the Black Sea.

The Odesa gas field is located on the Black Sea shelf much closer to mainland Ukraine than to the Crimean peninsula. It was developed by the Chornomornaftohaz which was seized by Russia together with Crimea.

The UN formed a special tribunal on 22 December 2016 to consider Ukraine's lawsuit against Russia over the use of the continental shelf.