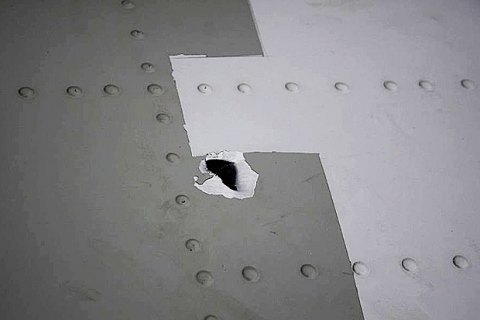 Ukraine intends to submit to the International Criminal Court the evidence of the attack on a Ukrainian Navy transporter An-26 over the Odesa gas field in the Black Sea, which was captured by Russia during the annexation of Crimea.

Speaking on 112 Ukrayina TV on 2 February, the chief military prosecutor of Ukraine, Anatoliy Matios, said the incident was being investigated.

"Everything that has happened is a proof of [Russia's] hybrid military aggression after the annexation of Crimea. The bullet [extracted from the fuselage] and examination of the aircraft attacked over the territory of Ukraine are proofs which will be hard to shrug off," Matios said.

"We cannot establish who opened fire, but the area of responsibility of Russia's senior leadership is within the competence of the International Criminal Court. The evidence is being collected and will be sent there," he added.

Shots were allegedly made from an antisubmarine warfare carrier of the Russian Black Sea Fleet. The An-26 was also followed by a detection radar of an air defence system. Signal rockets were fired from the ship.

Ukraine's Defence Minister Stepan Poltorak said the An's crew detected a Russian radar station operating in the active mode, which is normally used for missile guidance of air defense systems. The external examination of the aircraft upon the return to the home airfield revealed a 3-cm bullet hole from a shot with small arms made at the plane.

The Defence Ministry of the Russian Federation expressed protest to Ukraine’s military attaché saying that the Ukrainian aircraft carried out "two dangerous flights" around the drilling platforms Tavrida and Krym-1, which it insists are "Russian", at "extremely low altitudes, which threatened the safety of the staff and equipment", TASS reported.