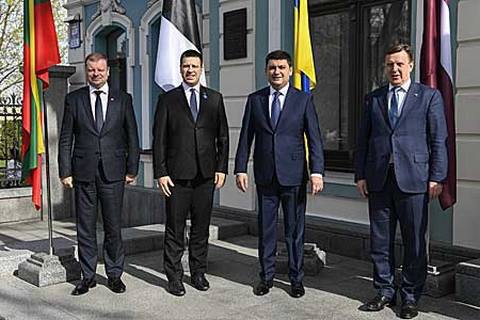 Lithuania, Latvia and Estonia pledged to never recognize the legitimacy of the annexation of Crimea by the Russian Federation, said the prime ministers of the Baltic countries and the head of Ukrainian Cabinet of Ministers Volodymyr Groysman following a meeting in Kyiv on 6 April.

"We strongly condemn Russia's aggression against Ukraine and stress that the sanctions imposed on Russia must remain in place until the Minsk agreements are fully implemented and Ukraine's sovereignty and territorial integrity are restored," reads the statement posted on the portal of Ukrainian government

"We will never recognize the attempt of annexation of the inalienable part of the territory of Ukraine - the Autonomous Republic of Crimea and the city of Sevastopol - and demand that the Russian Federation respect the territorial integrity and sovereignty of Ukraine and return to unconditional fulfilment of its obligations under the international law."

The heads of governments of Lithuania, Latvia and Estonia welcomed Ukraine's progress in implementing reforms and urged their continuation.

They promised to firmly support the European and Euro-Atlantic integration of Ukraine, granting of visa-free travel, and the strengthening of cooperation.