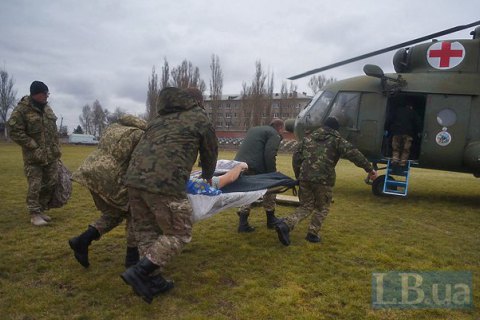 Two Ukrainian soldiers were wounded over the past day in the zone of anti-terrorist operation (ATO) in Donbas, the ATO press center reported on 6 April.

Despite the ceasefire agreements, Russia-backed terrorist units do not observe the silence mode made 29 provocative instances of shelling of the ATO positions during Wednesday.

In the Donetsk sector, Avdiyivka was the hot spot, where the positions of ATO troops were were repeatedly fired at from 82–mm mortars, grenade launchers of various systems and heavy machine guns. The defenders of Zaitseve and Pisky were pounded from machine guns and small arms.

In the Luhansk sector, terrorist units fired 120-mm mortars at the ATO positions near the village of Syze, and used anti-tank grenade launchers in the vicinity of Novooleksandrivka.

"Despite armed provocations, Ukrainian servicemen strictly observed the regime of silence and did not open return fire," the headquarters said.

On Wednesday, one local civilian was wounded by mortar shelling in Avdiyivka.