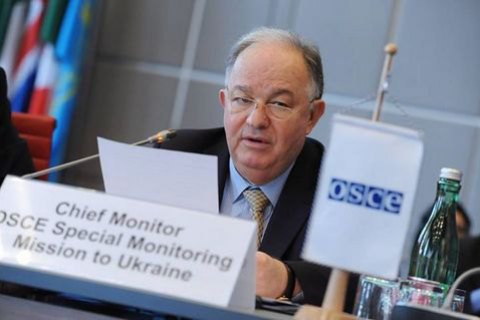 Head of the Special OSCE monitoring mission in Donbas Erturul Apakan will visit the area of the village of Pryshyb in Luhansk Region, where the car with monitors was blown up the day before.

"I am today traveling to the area to extend my support to the monitors and understand the situation better," Apakan said in a statement posted by the mission's press service on 24 April.

Apakan called on the parties to establish a stable ceasefire, arms withdrawal, complete demining, and ensure prosecution of the perpetrators of mining on the route of the SMM patrol.

"In spite of this tragedy, we remain committed to fulfilling our mandate and contributing to bring peace to the people of Ukraine," Apakan's statement reads.

On Sunday, a car of OSCE monitors blew up on a landmine in the territory controlled by the "LPR" militants. A mission officer, a US citizen, died in the explosion while a citizen of the Czech Republic and a German were injured.

Petro Poroshenko called to thoroughly investigate the incident and punish the perpetrators. The president stressed that SMM members should have unimpeded access for monitoring in the ATO zone.

The US State Department urged Russia to influence the militants it supports top make them first steps towards the restoration of peace.