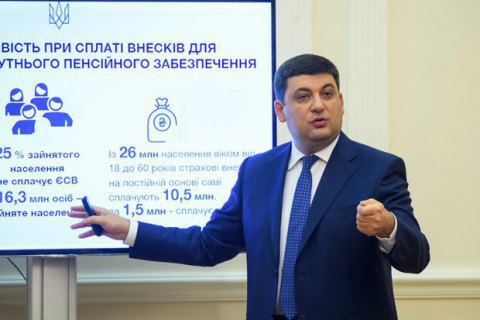 The National Reform Council under the President of Ukraine will consider a draft pension reform before it is sent to the Verkhovna Rada next week, Prime Minister Volodymyr Groysman told a press conference on Friday, 09 June.

"We have previously agreed with the president that the President will convene the Reform Council next week. We will review all the positions of the reform, and after that we will go to the parliament, meet with the deputies. The we have already announced basic principles of law, it contains no secrets," Groysman said, talking with the representatives of regional media.

The Cabinet approved the bill on pension reform on 17 May.

The draft reform provides that the minimum insurance period for retirement by age in 2018 will be raised to 25 years, and will be annually increased by one year until 2028 to reach 35 years. It is planned to introduce a single approach for the calculation of pensions based on the average salary at UAH 3,764.4 (currently from UAH 1,197.91 to UAH 3,764.4 depending on the year of retirement).