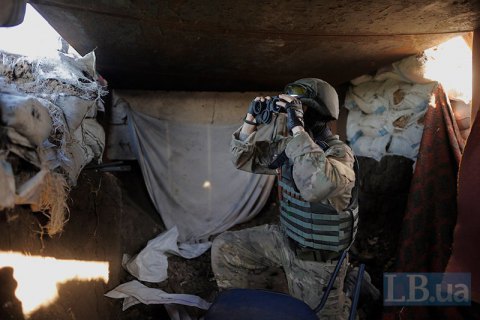 Over the past day, militants 22 times violated the ceasefire deal in the zone of the antiterrorist operation in Donbas, the ATO press center said in a Facebook release on Tuesday, 11 July.

The greatest number of attacks – twelve – was recorded in the coastal sector. After 18:00, militants fired grenade launchers at Ukrainian positions in Novomykhailivka and Berezove. The enemy fired heavy machine guns and IFV weapons at Shyrokyne at around 10:00 am. Talakivka and Maryinka were also fired at from machine guns.

"In response to the provocations of the enemy, Ukrainian troops returned fire from heavy machine guns," the headquarters note.

In the Luhansk sector, the Russia-backed terrorists pounded the villages of Malynove and Yekaterinivka from 82-mm mortars, and fired heavy machine guns – at Novotoshkovske and Novozvanivka.

"Unfortunately, at around 19:00 in the Stanytsya Luhanskaya area, one Ukrainian serviceman was killed," the report said.

On Sunday, President Petro Poroshenko and US Secretary of State Rex Tillerson agreed on steps aimed at peaceful settlement in Donbas.