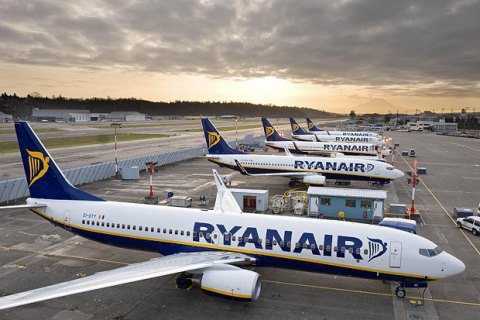 In a release on 11 July Ryanair accused the Ukrainian International Airport Boryspil failing to honour a growth agreement.

The Irish company said that Kyiv airport instead opted to protect air tickets at a high price (including by International Airlines of Ukraine and thus deprived Ukrainian consumers of access to the cheapest tickets in Europe, Ryanair said it had been left with "no choice" but to cancel four new Kyiv routes and seven new Lviv routes, which will "result in the loss of more than 500,000 passengers and 400 jobs."

"On behalf of Ukrainian visitors and consumers, we regret that Kyiv Airport has demonstrated that Ukraine is not yet a sufficiently mature or reliable business location to invest valuable Ryanair aircraft capacity.

People who have already purchased tickets for flights, by e-mail should contact the company for refund.

Ryanair announced its entry into the Ukrainian market on March 15 and planned to start flights from Boryspil on September 6.

On July 5, Boryspil announced that it had sent Ryanair its version of the agreement on the terms of service for the airline. On 10 July, the airport Boryspil refused to take into account a number of requirements of Ryanair, estimating the probable losses from the airline's operation at 2 bn hryvnya a year.