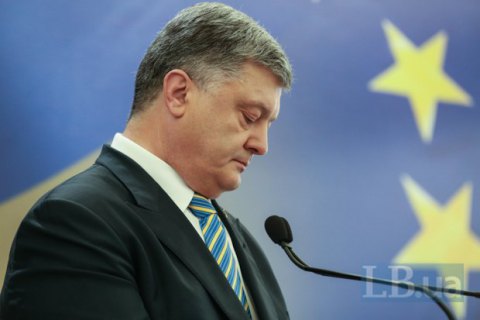 President Petro Poroshenko says the investigation of the crash of the Boeing-777 Malaysia Airlines in Donetsk Region as a common duty both before the dead and generations to come.

"Today, we light candles and bow our heads before the 298 innocent victims of the MN17 flight. This terrible tragedy resonated in the hearts of relatives and friends, each of us, both on that day, as now. A brazen crime that would have not happen, if not for the Russian aggression, the Russian installation and the Russian missile, imported from the territory of Russia," Ukrainian president wrote on his Facebook page to commemorate the anniversary of the tragedy.

Poroshenko says it is necessary "to prove to the aggressor terrorist the inevitability of responsibility for all committed crimes."

"That's why, without a second's hesitation, in the first days after the tragedy, I decided to transfer the investigation to the Netherlands. Also, without hesitation, a few days ago we have signed the Agreement between Ukraine and the Netherlands, which confirmed the choice of a mechanism to hold criminals responsible. This is our common response to the geopolitical ambitions of those who try to derail the establishment of truth at the highest international level," Poroshenko wrote.

"I am convinced that the objectivity and impartiality of the Dutch justice will complete this path. It is our common duty before the memory of those whose heartbeats were cut off exactly three years ago," the president added.

On Sunday, relatives of those killed in the crash held a "quiet protest" in front of the Russian Embassy in The Hague. Members of the families of the deceased established a symbolic "memory bench" in the park opposite the embassy, on which was attached a sign saying "We are waiting for responsibility and full clarity", and an inscription in Russian: "Humanity is above politics" below it.

Boeing 777 of Malaysia Airlines, on rout Amsterdam-Kuala Lumpur, was downed in Donbas near Snizhne, Donetsk Region on 17 July, 2014. All 298 people on board were killed.