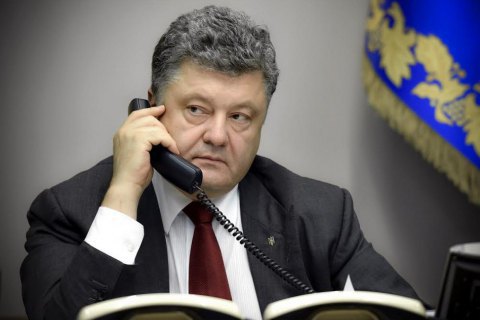 The leaders heard the report of the head of the OSCE Special Monitoring Mission in Ukraine, Ertugrul Apakan, and his deputy Alexander Hug.

Poroshenko said that the last days of July were "one of the bloodiest in 2017" and urged Russia to immediately stop the aggressive actions and arms deliveries to the occupied territories. The interlocutors noted the importance of a complete ceasefire in Donbas, the withdrawal of heavy weapons and the conduct of the pullout with the round-the-clock monitoring of the situation of the OSCE CMM.

Poroshenko also stressed the importance of introducing the UN peacekeeping mission to Donbas. Once again, the president accused the Russian side is blocking the release of the hostages, as Ukraine insists on their immediate release, including those who are illegally detained in Russia, in particular Oleh Sentsov and Roman Sushchenko.

Macron and Merkel said about the inadmissibility of any statements that undermine the territorial integrity of Ukraine, in particular, on the creation of the so-called "Malorossiya".

During the two-hour conversation, an agreement was reached to coordinate final steps on security and continue work on the road map for the implementation of the Minsk agreements. To this end, the foreign policy advisers of the "Normandy format" heads of state of the should meet in the second half of August.

Previously, Poroshenko said that the summit of "the Normandydy four" can be organized following the results of telephone conversations.

The last time the leaders of the "Normandy Four" met in the fall of 2016, without much success.