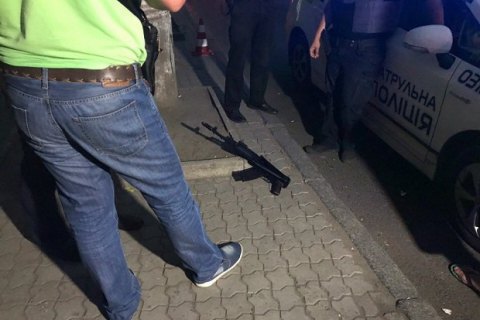 The shootout in Dnipro late on Monday, 24 July, in which two former ATO fighters were killed, was caused by a clash of "economic interests", said Oleh Hroz, the acting chief of the regional police.

"It was a conflict of purely economic interests on both sides: Edmond Sahakyan, a former lawyer and his brother on one side, and the second party," Hroz told the local TV channel 9. He did not elaborate on who were the other party, though

Hroz said the representatives of the two conflicting parties had a meeting before the shootout to try and settle the conflict.

He said four wounded attackers were hospitalized after the shootout.

In the meantime, the editor-in-chief of the Censor.NET online publication Yuriy Butusov said that the shootout was provoked by professional hitmen hired by a businessman who is in long-standing conflict with Sahakyan.

Censor.NET posted the photos of the wounded attackers in a hospital.

Some of the attackers fled the scene and are being searched by the Dnipro police.