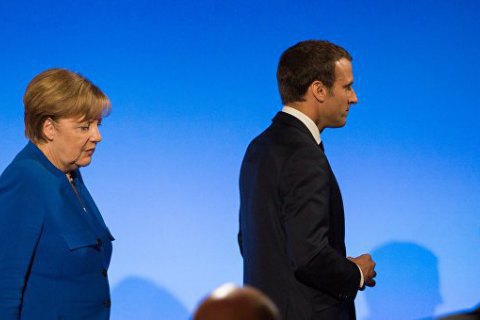 Leaders of Germany, France, Ukraine and Russia in the course of telephone talks on Monday agreed on a list of urgent measures to restore peace in Donbas.

In a the joint statement circulated on Monday evening following the talks, German Chancellor Angela Merkel and the France President E-mmanuel Macron stated the need to i-mmediately stop ceasefire violations and take measures against the destruction of civil infrastructure and important facilities in order to prevent a humanitarian catastrophe in Donbas.

Priority is given to the disengagement of conflicting parties and the withdrawal of heavy weapons from the contact line, as well as the unrestricted and secure access of OSCE monitors to all areas of Donbas, including stretch of the temporarily uncontrolled Ukrainian-Russian border.

The Working Group on Security of the Tripartite Contact Group is tasked with identifying and identifying these areas in the next meeting, which will be held on 2 August.

Macron and Merkel urge the conflicting parties to continue the exchange of prisoners by the formula of "all for all" until the end of the year, as stipulated in the Minsk agreements.

"The parties to the conflict will take measures to restore economic relations, the details should be discussed as soon as possible," the list of measures posted on the website of the German government says.

During a telephone conversation in the Normandy format, Macron and Merkel stressed "the inadmissibility of any statements that undermine the territorial integrity of Ukraine, in particular, on the creation of the so-called "Malorossiya".

"The interlocutors noted the importance of a complete ceasefire, the withdrawal of heavy weapons and the conduct of the withdrawal of forces with round-the-clock monitoring of the situation by the OSCE Special Monitoring Mission," Poroshenko said.

The report also says that the leaders of the countries agreed on a meeting of their foreign policy advisers to continue work on the road map for the implementation of the Minsk agreements. It should take place in the second half of August.

In addition, in the course of negotiations, Poroshenko called for the deployment of a UN peacekeeping mission in Donbas.

The Kremlin's press service has said that Vadimir Putin "in detail outlined the Russian approaches to all key provisions" of the Minsk accords.