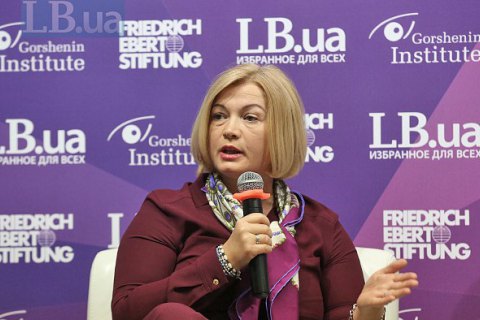 Russian President Volodymyr Putin is trying to distort the idea of the deployment of peacekeepers in Donbas, the first deputy speaker of the Ukrainian parliament, Iryna Herashchenko, has said.

She was commenting on Putin's statement at a news conference earlier today after the BRICS summit. There the Russian leader said that peacekeepers should be deployed along the line of contact only.

"Putin, in the best traditions of the hybrid war, is trying to distort the idea of the Ukrainian leadership about peacekeepers in Donbas. Trying to turn everything upside down, he instructs his loyal minister [Sergey] Lavrov to submit a resolution to the UN Security Council on the deployment of peacekeepers along the line of contact," she said on Facebook on Tuesday.

"Fancy that: the contact line became the contact line because of the Russian aggression. For us, it is the line of contact with our territories temporarily occupied by Mordor [euphemism for Russia]. We will definitely recover those territories. This is a line that should disappear from Ukrainian soil for good on the day we recover control of our border. This is not the Ukrainian border therefore the deployment of peacekeepers solely along the contact line is ruled out," she said.

Herashchenko said that Ukraine insists on the deployment of peacekeepers on the entire uncontrolled territory of Donetsk and Luhansk regions. Their mandate must end on the Ukrainian-Russian border.

Iryna Herashchenko represents Ukraine in one of the subgroups of the trilateral contact group on a Donbas settlement.