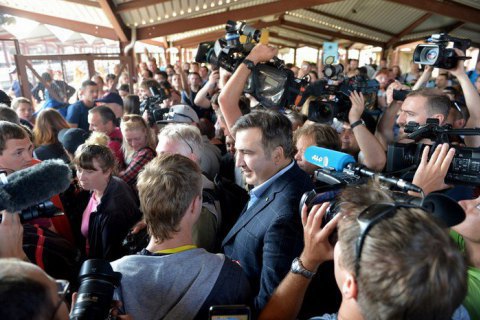 The former Georgian president and ex-head of the Odesa regional state administration, Mikheil Saakashvili, has stormed through the border.

An LB.ua correspondent has reported that a group of MPs and supporters of Saakashvili approached the Shehini checkpoint, moved aside the cars which blocked the traffic and walked Saakashvili into the Ukrainian territory.

Border guards decided not to use arms.

"Peaceful citizens from the Ukrainian side peacefully came to the Ukrainian border and absolutely peacefully picked a delegation of MPs, which included Mikheil Saakashvili. Tey they peacefully crossed into Ukraine by foot," MP Ivan Krulko described the situation at a rally on the Polish side of the border.

State Border Service spokesman Oleksandr Slobodyan had a different view on the situation: "The crowd stormed into the Shehini checkpoint. A scuffle broke out." "Now it is difficult to imagine the consequences of this situation," he added.

Saakashvili, who was stripped of Ukrainian citizenship, attempted to cross the border between Poland and Ukraine by taking the train from Przemysl to Kyiv, which was to depart at 2.07 p.m. Kyiv time. Yuliya Tymoshenko, Valentyn Nalyvaychenko, Mustafa Nayem, Viktor Chumal and other Ukrainian politicians boarded the train together with him.

However an announcement was made that the train would not depart as long as a person who has no right to enter Ukraine is on board. Saakashvili alighted and took the bus to the Shehini checkpoint.