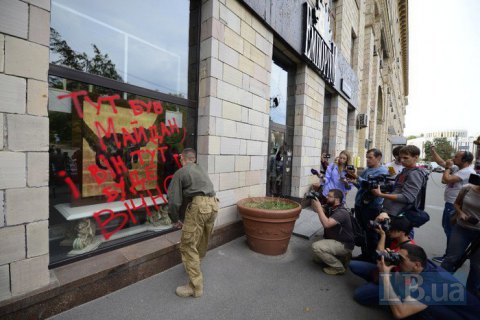 On 3 September, a low-key protest gathered outside the Emporium furniture shop in Kyiv's Hrushevskyy Street, the site of violent clashes between Maydan protesters and police in 2014. People came to express their disappointment and anger over the shop owner's decision to remove the Maydan graffiti "The Icons of the Revolution" from its wall.

According to an LB.ua correspondent, they sprayed the wall with slogans "Maydan was here and it will be here forever", "Respect for history", "You will not wipe us off". The protesters broke the glass at the door of the closed shop and set some tires on fire at the entrance.

"The Icons of the Revolution", a series of three portraits and quotes of prominent Ukrainian poets Lesya Ukrayinka, Ivan Franko and Taras Shevchenko, was produced by the artist known as Sociopath on 10 February 2014 when police opened fire on Maydan protesters at the very beginning of Hrushevskyy Street.

The first four buildings along Hrushevskyy Street were given an official status of memorable sites and are protected by law.

Kyiv prosecutor's office No 6 opened a criminal case over the ruined graffiti, its press service said late on 3 September.

"According to the Ukrainian Culture Ministry's decree No 869, dated 15 October 2014, the site of violence and mass killings of citizens in Kyiv's Hrushevskyy Street is considered an object of cultural heritage whose damage or destruction carries criminal punishment," the prosecutor's office said.

Prosecutor-General Yuriy Lutsenko said that the business of "the vandals from Emporium" are in for thorough inspections by all government controlling agencies.

"Artists will be able to restore them based on photos," he said.

Renovation works will begin on 4 September.