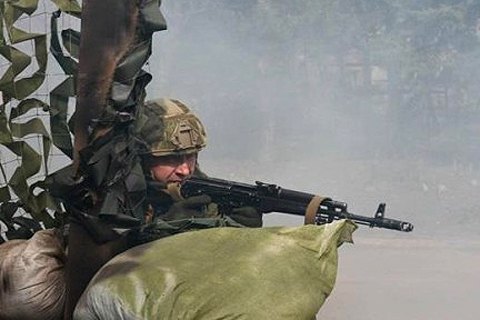 Over the past day, militants have 22 times violated the ceasefire in the area of the antiterrorist operation (ATO) in Donbas. In 17 instances, ATO forces returned fire.

One Ukrainian soldier was wounded as a result of enemy shelling, the ATO HQ press centre said on Facebook on 4 October.

The Russia-backed occupying forces concentrated attacks on the Maritime (Mariupol) sector. "In addition to mortars of various kinds, the militants used weapons, which should have long been pulled away from the line of contact," the ATO HQ press centre said.

In the evening, the terrorists fired portable rocket launchers Grad Partizan, rocket-propelled grenades and a heavy machine gun near Shyrokyne. Later, the adversary used an 82-mm mortar near the same village. After 6 p.m., for two hours they were pounding a strongpoint of the Ukrainian military in the outskirts of Talakivka using multiple-launch rocket systems, firing 38 shells. In the evening, the occupiers fired twice with 120-mm mortars on the residential sector of the village of Vodyane.

In the Donetsk sector, the militants fired twice with grenade launchers and heavy machine guns on the ATO strongpoints in the vicinity of Avdiyivka and Nevelske, and shelled the Butivka coalmine, Zaytseve and Mayorske with 120-mm mortars.

In the Luhansk sector, the separatists targeted the Ukrainian military stationed outside Tryokhizbenka using grenade launchers and small arms on four occasions in the evening and at night.

On 3 October, Donbas militants used portable rocket launchers banned under the Minsk agreements for the first time since the beginning of the "school" ceasefire.