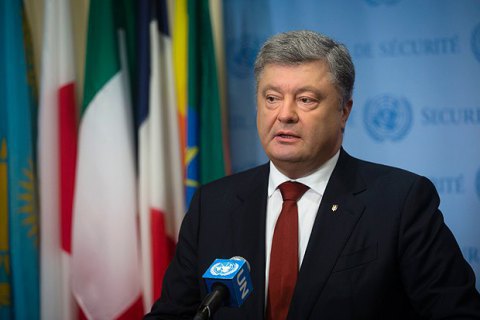 President Petro Poroshenko has said he is ready to support a bill on an Anticorruption Court, but none of the existing ones has sufficient support in parliament. Poroshenko suggested that MPs come up with a new one.

"There should be a dedicated anticorruption vertical consisting of a separate Anticorruption Court, a cassation chamber in the Supreme Court of Ukraine, and, as to be determined by parliament, representative offices of an Anticorruption Court in the regions," the president said during a visit to Chernihiv on Wednesday, 4 October.

Poroshenko said that the existing bills are imperfect, and, to an extent, PR projects by certain political forces.

"Everybody seems to be in favour [of Anticorruption Court], but the devil is in the detail. It is very important, therefore, to garner enough support in parliament for such a bill, which has been impossible so far," he said.

Poroshenko suggested that parliament form a working group to develop a middle-ground bill that could be supported by the entire parliament.

"I'm ready to take this draft and rework it together with the group, or, if I find it absolutely acceptable – to support it and refer to the Ukrainian parliament as urgent," said the president. He added that this issue should not be used for political bargaining.

In February, MPs from the Euro-Optimists group registered a bill on anticorruption courts which later received negative feedback from the High Council of Justice.